Designing 3D-Printed Materials to Help the Body Heal Itself

In the laboratory of McGowan Institute for Regenerative Medicine affiliated faculty member Prashant Kumta, PhD, the Edward R. Weidlein Chair Professor at the University of Pittsburgh Swanson School of Engineering and School of Dental Medicine and professor in the Departments of BioEngineering, Chemical and Petroleum Engineering, Mechanical Engineering and Materials Science, and Oral Biology, one of the visions is to revolutionize metallic biomaterials and technologies to create life changing devices. This will lead to engineered systems that will interface with the human body to prolong and improve quality of life, specifically with craniofacial and orthopedic applications. Dr. Kumta and his team’s goal is to engineer logical and clinically relevant options that could regenerate mineralized tissue (bone/tooth) formation utilizing a unique combination of evolutionary load-bearing biodegradable materials (metals), growth factors, and cell therapy. 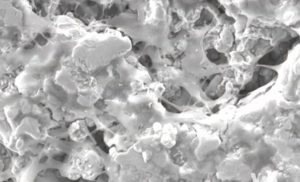 Recently, Rosanne Skirble of Voice of America News reported (video here) that Dr. Kumta and his team of graduate students are designing 3D-printed materials that are a match for the patient’s body, and are absorbed or excreted as new tissue grows and the wound heals. In the laboratory, Dr. Kumta’s team has developed both magnesium and iron alloys to use as the materials’ base. He calls magnesium — a mineral needed for more than 300 biochemical reactions in the body — “a perfect fit” for the technique.

“It has the mechanical characteristics that meet natural bone, both from the strength [and] the toughness as well as the density. It has the perfect density that will match with natural bone,” he said.
Dr. Kumta’s team is also working with a novel formulation of calcium phosphate putty that can be injected to fill spaces between fractured bones. A 3D-printed biodegradable plate or screw would hold that filler in place.

“The fixation plate will provide the mechanical strength needed to carry the load, and the bone-wide filler would help provide the healing and the bone formation,” he said.

Pre-clinical trials are now underway in animals. Dr. Kumta said the work is revolutionary, offering the prospect of a better outcome for the patient.
“Rather than implanting a screw or plate or joint,” he said, “doctors could give the body’s own regenerative ability a more effective method to heal itself.”

A new preservation system has been developed that pumps cooled, oxygen-rich fluid into donor livers not only keeps the organs in excellent condition for as long as 9 hours before transplantation, but also leads to dramatically better liver function. This system offers the potential to increase the survival of liver transplant recipients, according to a series of preclinical studies by researchers at the University of Pittsburgh School of Medicine and the McGowan Institute for Regenerative Medicine. The system could be tested with transplant patients at UPMC later this year.

The findings, which were published online in the American Journal of Transplantation, suggest that it’s possible to use the technique of “machine perfusion” with a newly created cell-free oxygenated solution to expand the number of high-quality livers available for transplant, thereby shortening waiting times and reducing patient mortality.

Currently, 20 to 40 percent of donor livers cannot be transplanted into recipients because oxygen deprivation during storage and transport in conventional containers can make pre-existing tissue damage worse, explained senior investigator Paulo Fontes, MD, UPMC transplant surgeon, associate professor, Starzl Transplantation Institute, Department of Surgery, Pitt School of Medicine, and a deputy director of the McGowan Institute. If the damage is too extensive, the organ cannot be safely transplanted into a patient.

“Standard practice is to use a method called cold static preservation, which uses tissue cooling to slow down metabolism with the aim of reducing the demand for oxygen and thus protecting cells from death,” Dr. Fontes explained. “In our new system, we pump a special fluid designed to deliver oxygen to the liver, creating an environment that supports normal function. The integrity of the cells and vital metabolic activity is sustained for eventual transplantation of the organ.”

The research team optimized a machine-perfusion (MP) device that was developed by Organ Assist, a company in the Netherlands, and added a fluid with a hemoglobin-oxygen carrier component to deliver high concentrations of oxygen to the tissue. The liver is immersed in chilled fluid, which is also pumped through tubes inserted into the organ’s large blood vessels to effectively oxygenate the tissue.

The team transplanted six pigs with livers that had been kept for 9 hours, roughly the average time between recovery of the organ and transplantation into a recipient, in the MP system and another six with organs placed in the standard container.

They found that 100 percent of the pigs who got MP livers survived, compared to 33 percent of those who received conventionally preserved organs. The MP livers functioned better, produced more bile, and had higher oxygen levels than their conventional counterparts, and analyses of multiple biomarkers including inflammatory mediators indicated that the MP livers had been better preserved.

Also, “it was immediately obvious to us that the pigs who received MP livers looked much healthier and easily moved around their pens just hours after they woke up from the surgery,” Dr. Fontes said. “They didn’t look as ill as the animals treated with standard cold preservation. It was amazing.”

The data from the studies have been shared with federal regulators, he added, with the aim of launching a clinical trial to test the system at UPMC this year.

“This system has great potential to enhance our current standards for organ preservation, which should translate into more patients getting a life-saving procedure with potentially better outcomes,” Dr. Fontes said. “Not only that, we have hopes of a faster recovery because the liver could be less likely to become injured due to a lack of oxygen.”

Regenerative medicine uses clinical procedures to repair or replace damaged or diseased tissue and organs vs. some of the traditional therapies that are designed to just treat the symptoms. In Pitt Magazine, Holden Slattery recently reported on the progress being made by patients enrolled in a University of Pittsburgh-University of Pittsburgh Medical Center study that tests a new approach to significant muscle loss. 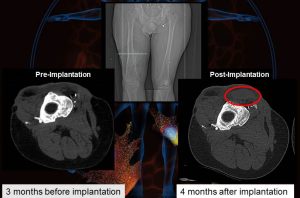 Co-led by McGowan Institute for Regenerative Medicine faculty members Stephen Badylak, DVM, PhD, MD, Professor in the Department of Surgery, a Deputy Director of the McGowan Institute, and Director of the Center for Pre-Clinical Tissue Engineering within the Institute, and J. Peter Rubin, MD,  Chair of the Department of Plastic Surgery, UPMC Endowed Professor of Plastic Surgery, and Professor of Bioengineering at the University of Pittsburgh, the research team uses extracellular matrix (ECM) from a pig’s bladder to regenerate diminished skeletal muscle. ECM is the remaining tissue after all the cells have been removed from the pig’s bladder. Dr. Badylak has been researching the effects of ECM since 1987. This study is the first to utilize ECM to replace and regenerate muscle tissue.

In each of the study’s five surgeries, scar tissue from the damaged leg muscles was removed and ECM was placed near healthy muscle. Within months, mature skeletal muscle cells emerged at the site of the ECM placement, along with other cells that appeared to be actively regenerating into skeletal muscle cells. Eventually, the ECM dissolved leaving only healthy muscle tissue.

Three of the five patients have shown a 20% or greater improvement in strength of the injured leg. The results haven’t only shown dramatic improvement on physical tests. The participants are now engaging in a range of activities including running, bicycling, playing soccer, and even skiing—activities they couldn’t enjoy before their surgery.

“We love science, and we’re very interesting in these stem cells,” Dr. Badylak says. “But at the end of the day the story is incomplete without the impact on patients’ daily activities.”