Stephen Badylak, DVM, PhD, MD is a Professor in the Department of Surgery, a Deputy Director of the McGowan Institute for Regenerative Medicine (MIRM), and Director of the Center for Pre-Clinical Tissue Engineering within the Institute.

Dr. Badylak practiced veterinary medicine at a mixed animal practice in Glenwood, Illinois and in Hobart, Indiana. Dr. Badylak began his academic career at Purdue University as an Assistant Research Scholar at the Hillenbrand Biomedical Engineering Center in 1983, and subsequently held a variety of positions including Postdoctoral Research Associate (1985), Associate Research Scholar (1988) and served as the Director of the Hillenbrand Biomedical Engineering Center from 1993-1998. Dr. Badylak served as the Head Team Physician for the Athletic Department for 16 years (1985-2001). Prior to his move to Pittsburgh, Dr. Badylak served as Senior Research Scientist within the Department of Biomedical Engineering at Purdue University. Dr. Badylak holds over 60 U.S. patents, 300 patents worldwide, has authored more than 350 scientific publications and 40 book chapters. He has served as the Chair of the Study Section for the Small Business Innovative Research (SBIR) at the National Institutes of Health (NIH), and as chair of the Bioengineering, Technology, and Surgical Sciences (BTSS) Study Section at NIH. Dr. Badylak is now a member of the College of Scientific Reviewers for NIH. Dr. Badylak has either chaired or been a member of the Scientific Advisory Board to several major medical device companies.

Dr. Badylak is a Fellow of the American Institute for Medical and Biological Engineering, a charter member of the Tissue Engineering Society International, and past president of the Tissue Engineering Regenerative Medicine International Society (TERMIS). He is also a member of the Society for Biomaterials. Dr. Badylak is the Editor-in-Chief of the Journal of Immunology and Regenerative Medicine and serves on the editorial board of several other journals. He has received many awards, including the Sigma Xi Scientific Society 2002 Research Award, the Pittsburgh Business Times Hero in Health Care Innovation & Research for 2005, the 2005 and 2008 Carnegie Science Center Award for Excellence, the 2005 Clemson Award from the Society for Biomaterials, and the Chancellor’s Distinguished Research Award in 2008. 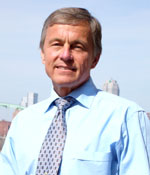