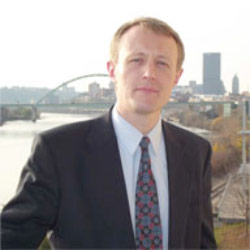 McGowan Institute for Regenerative Medicine affiliated faculty member Igor Nasonkin, PhD, has recently learned how to grow a 3D layer of early human retinal cells in the laboratory, with hopes of one day implanting them in people with damaged retinas. Dr. Nasonkin, who has a doctorate in human genetics and is director of the University of Pittburgh’s Retinal Repair Laboratory and the assistant director of the Louis J. Fox Center for Vision Restoration of the University of Pittsburgh Medical Center and University of Pittsburgh, doesn’t want to pinpoint when his techniques might be tried in human patients, but said other kinds of human tissue transplants in the eye have paved the way for his group’s work. His research was recently highlighted by Mark Roth of the Pittsburgh Post-Gazette.

“It looks like if you push cells to a certain stage,” Dr. Nasonkin said, “they can self-assemble as long as you feed them the right nutrition.” And that means scientists may soon be able to create a complete “retinal patch” for people with retinitis pigmentosa or other diseases.

Photoreceptor death in retinal and macular degenerative diseases is a leading cause of inherited vision loss in developed countries. Vision loss may be devastating and urgently requires new ideas, approaches, and paradigms on the molecular level, to alleviate this condition. Novel therapeutic strategies have recently emerged, from mechanical to cell-based, to repair neural circuits affected by photoreceptor (PR) cell loss. Trophic factor delivery to extend the life of dying PRs has been pursued in experimental animals, and in some instances, in the clinic. Gene therapy approaches have been applied successfully in one type of Leber congenital amaurosis (LCA). Retinal implants designed to capture photons and transmit the electric signals to ganglion cells have been used in the clinic with some promising outcomes.

Transplantation of human embryonic stem cell (hESC)- or induced pluripotent stem cell (iPS)-derived retinal progenitors or retinal neurons is a relatively recent direction for retinal therapies. hESCs or iPSs can be directed to retinal fate with variable efficiency. Compared to the retinal sheet transplantation strategy, where the donor retina and its preservation constitute major limitations, the stem cell approach is based on using hESCs or iPSs, which provide an unlimited source of cells. Furthermore, there is optimism, stemming from research on mouse ES cells, that such human protocols might be improved by engineering the development of the whole retina in a dish.

The transplantation of retinal cells into mammalian retina produces variable outcomes and success, yet seems very promising due to some rare successful experiments demonstrating the efficient integration of retinal cells into the recipient retina. A greater understanding of biology and improvements in methodology are required before such protocols may be introduced into the clinic. The major obstacles to retinal cell replacement are the elusive molecular signature of the “transplantable” retinal progenitor, the specific synaptic integration of such cells into preexisting neural retinal circuitry of the host, and the ability of grafted retinal cells to migrate through the impermeable outer limiting membrane and position themselves into the required retinal niche (such as photoreceptor layer).

A combination of retinal stem cell grafting and trophic factor delivery has recently emerged as a fruitful direction to alleviate vision loss by slowing down the death of retinal cells, especially photoreceptors. Such direction may not necessarily require the integration of transplanted cells into specific retinal layer, yet may produce long lasting positive therapeutic effect, and should be definitely explored further. Induction of the endogenous regeneration in mammalian CNS, including retina, is still an unattainable goal of therapies aimed at repairing age-related vision loss and retinal trauma. However, some lower species, such as fish, amphibians, and to some extent, birds, have active regenerative mechanisms in the eye, which last throughout their lives.

Regeneration requires the endogenous retinal cells (either dormant stem cells or postmitotic mature cells in retina) to reenter the mitotic cycle, differentiate into the cell type needed for retinal repair, and replenish the lost cells. Understanding the molecular mechanisms governing the developmental plasticity of a retinal cell is the key to be able to induce mature retinal cells to revert to immature progenitors. Epigenetic mechanisms are one likely avenue, which should be explored to change the plasticity of retinal cells and enhance the endogenous regeneration in the retina.

Eventually, Dr. Nasonkin envisions a retinal eye bank derived from adult stem cells that will contain enough different types of human tissue to be compatible with most people’s immune systems.