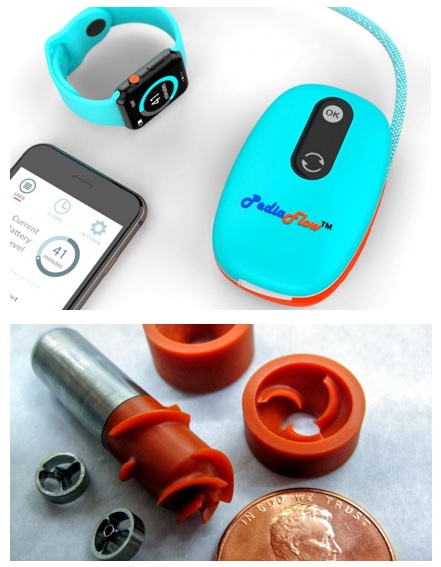 The Center for Disease Control estimates that roughly 40,000 infants are born with congenital heart defects (CHDs) each year. Among that population, 25 percent are critical cases that require cardiac surgery. The waitlist for a heart transplant continues to grow; yet, the only FDA-approved life-saving device for CHD has shortcomings and is based on technology from the 1970s.

After being defunded by a company with rights to its intellectual property, development of a pediatric heart-assist device has been revived at Cornell University with the help of a $4.7 million grant from the U.S. Department of Defense.  Faculty and students from the Swanson School of Engineering and the McGowan Institute for Regenerative Medicine are a part of this work.

Development and preclinical validation of the PediaFlow heart-assist system will be led by James Antaki, PhD, the Susan K. McAdam Professor of Heart Assist Technology at Cornell’s Meinig School of Biomedical Engineering.  Dr. Antaki is an Adjunct Professor at the University of Pittsburgh in the Department of Bioengineering and a McGowan Institute affiliated faculty member.  Pitt’s subcontract on this DoD award will include the efforts of McGowan Institute faculty member Marina Kameneva, PhD, research professor of surgery and bioengineering, and William Wagner, PhD, director of the McGowan Institute and distinguished professor of surgery, bioengineering and chemical engineering, who will direct studies assessing the biocompatibility and overall suitability of the PediaFlow pumps developed under the DoD award for clinical use.  Salim Olia, PhD (BioE PhD ’18), adjunct assistant professor of surgery at the University of Pennsylvania School of Medicine conducted the crucial bench and preclinical PediaFlow tests as part of his PhD dissertation in the Department of Bioengineering at Pitt and is continuing his work for the DoD award.

“Despite the clinician mantra that ‘babies are not just tiny adults,’ pediatric heart pump development has been historically limited to the miniaturization of existing adult devices with minimal success,” said Dr. Olia. “PediaFlow represents a clean slate approach of designing from the ground up with the primary objective of maximizing patient safety by minimizing blood damage,” he continued.

According to Harvey Borovetz, PhD, Distinguished Professor of Bioengineering and the Robert L. Hardesty Professor of Surgery, “It is our goal at the end of the three-year DoD award to have completed development of the PediaFlow heart-assist pump, in anticipation of submitting an Investigational Device Exemption (IDE) application to the FDA and initiating clinical feasibility studies in these very special patients.”

PediaFlow is an alternative to a heart transplant for infants with congenital heart failure. The device is based on the world’s smallest magnetically levitated rotodynamic blood pump, which was invented by Dr. Antaki and colleagues. Implantation of the device – about the size of a AA battery – can potentially rehabilitate an infant’s heart by stimulating recovery of the muscle.

The system also includes a battery-operated external control unit and peripherals for diagnostics and maintenance.

Dr. Antaki and the Pitt team began work on the device in 2002, when the National Institutes of Health (NIH) issued a call for proposals for pediatric circulatory support because none existed at the time. By 2013, they had found a commercial partner for PediaFlow, as required by the NIH, and was ready to move the device into the next phase of development.

But the research came to an abrupt end when the partner was acquired by a company with no interest in pediatric heart pumps. The project was shelved and the government grant money that had been funding it was returned.

Dr. Antaki reluctantly turned his attention to other projects – until he was contacted by a woman asking to help her granddaughter, who needed a heart transplant.

“My first reaction was, ‘How can I possibly help you? I’m just a professor of biomedical engineering,’” said Dr. Antaki, “but then it occurred to me that if we were still doing the PediaFlow project, then I really could help.”

Dr. Antaki did some research into the Bayh-Dole Act, which allows federal contractors who acquire ownership of inventions made with federal funding to retain that ownership. Two large government contracts from the NIH had made the PediaFlow device possible, yet a private corporation had acquired the license for the technology for the purpose of preventing anyone from developing it further.

In March 2016, Dr. Antaki wrote to the act’s sponsor, former Republican Sen. Robert Dole of Kansas, who had taken a position at a Washington, D.C., law firm following his retirement from the Senate. Sen. Dole arranged an introduction to intellectual property lawyers from the firm; by November 2018, Dr. Antaki had won the right to develop the PediaFlow.

Said Dr. Antaki: “It is a new lease on life for this device for children who have no other alternative.”