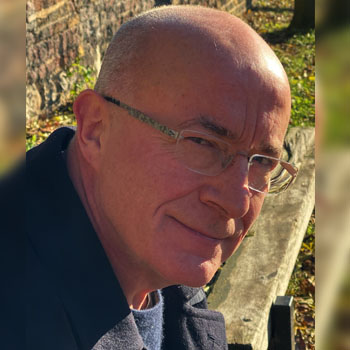 Fighting cancer and chronic disease is tiring work for the immune system. When T cells are engaged in this kind of lengthy battle, they can become exhausted, or unable to function properly. One immunotherapy that revitalizes these cells by blocking an immune checkpoint protein called LAG3 was recently approved by federal regulators. But exactly how LAG3 works has remained a mystery — until now.

Published in Nature Immunology, a new study pinpoints how LAG3 modulates T cell activity, providing important insights for development of other LAG3-blocking therapies for cancer and autoimmune disorders. McGowan Institute for Regenerative Medicine affiliated faculty member Simon Watkins, Ph.D. (pictured), the founder and director of the Center for Biologic Imaging at the University of Pittsburgh, a member of the UPMC Hillman Cancer Institute, and a distinguished professor and vice chairman within the Department of Cell Biology, is a co-author of the study.

“Although LAG3 has been studied extensively as a potential immunomodulatory target, there hadn’t been an awful lot known about how it works. It truly was a black box,” said co-senior author Dario A.A. Vignali, Ph.D., distinguished professor and vice chair of immunology at the University of Pittsburgh School of Medicine. “I believe this is a landmark study because we finally know how LAG3 works. This will help the development of new LAG3-targeting therapeutics.”

T cells protect the body by eliminating threats such as cancer and infection. Molecules called antigens from cancer cells and pathogens are recognized by T cell receptors, activating these immune cells for battle. But, exhausted T cells don’t engage normally with antigen-presenting cells because immune checkpoint proteins slow immune responses like brakes on a car.

Research on two immune checkpoints called PD-1 and CTLA-4 led to development of breakthrough drugs called immune checkpoint inhibitors more than a decade ago. These therapies work by releasing the immune system’s brakes and revving up T cell function.

In March 2022, the U.S. Food and Drug Administration approved the first LAG3 inhibitor for advanced melanoma, and 18 other LAG3-inhibitiors are in clinical trials — despite murkiness around how this checkpoint inhibits T cell function.

To “look under the hood” of LAG3, Dr. Vignali started this research in his previous position at St. Jude Children’s Research Hospital along with first author Clifford Guy, Ph.D., who was a postdoc in his lab at the time, and co-senior author Creg Workman, Ph.D., who is now a research assistant professor of immunology in Vignali’s lab at Pitt.

When T cells engage with an antigen-presenting cell, they form a contact point called an immunological synapse that gets flooded with T cell receptors.

“We found that LAG3 binds to T cell receptors, but it doesn’t inhibit them directly,” explained Dr. Workman. “Instead, LAG3 uses T cell receptors to hitch a ride to the immunological synapse.”

Using special dye that measures acidity, the team found that accumulation of LAG3 in the synapse creates acidic conditions that disrupt association between coreceptors — CD4 on helper T cells or CD8 on killer T cells — and a signaling enzyme called Lck, thwarting a key requirement for T cell activation and signaling.

Current LAG3-blocking drugs target an interaction between LAG3 and so-called MHC Class II molecules, which were thought to be essential for LAG3 function.

But the new study found that LAG3 suppression of T cell activity occurred with or without these molecules.

“This research calls into the question the design of LAG-blocking therapeutics in development,” said Dr. Vignali, who is also associate director for scientific strategy and co-leader of the Cancer Immunology & Immunotherapy Program at UPMC Hillman Cancer Center. “They obviously work, but do they work optimally? They’ve been designed to block Class II interactions, but this study shows that LAG3 can function in absence of Class II.”

“Now that we know LAG3 binds to the T cell receptor, we might be able to generate optimal blockers that target this interaction,” he added.

Beyond cancer, Dr. Vignali said that the research could inform new treatment approaches for autoimmune and inflammatory disorders. Because these diseases are caused by overactive immune response, potential drugs could enhance — rather than block — LAG3 activity.

“To help the body fight cancer, you want to release the immune system brakes,” explained Dr. Vignali. “But for autoimmunity, you want to pump the brakes harder.”