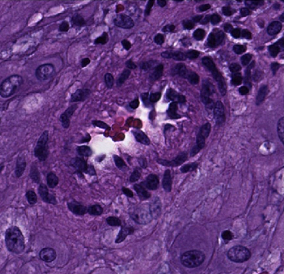 After a baby is born, doctors sometimes examine the placenta—the organ that links the mother to the baby—for features that indicate health risks in any future pregnancies. Unfortunately, this is a time-consuming process that must be performed by a specialist, so most placentas go unexamined after the birth. A team of researchers from Carnegie Mellon University (CMU) and the University of Pittsburgh Medical Center (UPMC)—including McGowan Institute for Regenerative Medicine affiliated faculty member Philip Leduc, PhD, William J. Brown Professor of Mechanical Engineering with appointments in Biological Sciences, Computational Biology, and Biomedical Engineering at CMU—report the development of a machine learning approach to examine placenta slides in The American Journal of Pathology, published by Elsevier, so more women can be informed of their health risks.

One reason placentas are examined is to look for a type of blood vessel lesions called decidual vasculopathy (DV). These indicate the mother is at risk for preeclampsia—a complication that can be fatal to the mother and baby—in any future pregnancies. Once detected, preeclampsia can be treated, so there is considerable benefit from identifying at-risk mothers before symptoms appear. However, although there are hundreds of blood vessels in a single slide, only one diseased vessel is needed to indicate risk.

“Pathologists train for years to be able to find disease in these images, but there are so many pregnancies going through the hospital system that they don’t have time to inspect every placenta,” said Daniel Clymer, PhD, alumnus, Department of Mechanical Engineering, CMU. “Our algorithm helps pathologists know which images they should focus on by scanning an image, locating blood vessels, and finding patterns of the blood vessels that identify DV.”

Machine learning works by “training” the computer to recognize certain features in data files. In this case, the data file is an image of a thin slice of a placenta sample. Researchers show the computer various images and indicate whether the placenta is diseased or healthy. After sufficient training, the computer is able to identify diseased lesions on its own.

It is quite difficult for a computer to simply look at a large picture and classify it, so the team introduced a novel approach through which the computer follows a series of steps to make the task more manageable. First, the computer detects all blood vessels in an image. Each blood vessel can then be considered individually, creating smaller data packets for analysis. The computer will then access each blood vessel and determine if it should be deemed diseased or healthy. At this stage, the algorithm also considers features of the pregnancy, such as gestational age, birth weight, and any conditions the mother might have. If there are any diseased blood vessels, then the picture—and therefore the placenta—is marked as diseased. The UPMC team provided the de-identified placenta images for training the algorithm.

“This algorithm isn’t going to replace a pathologist anytime soon,” Dr. Clymer explained. “The goal here is that this type of algorithm might be able to help speed up the process by flagging regions of the image where the pathologist should take a closer look.”

“This is a beautiful collaboration between engineering and medicine as each brings expertise to the table that, when combined, creates novel findings that can help so many individuals,” added lead CMU investigators Jonathan Cagan, PhD, and Dr. LeDuc.

“As healthcare increasingly embraces the role of artificial intelligence, it is important that doctors partner early on with computer scientists and engineers so that we can design and develop the right tools for the job to positively impact patient outcomes,” noted co-author Liron Pantanowitz, MBBCh, formerly vice chair for pathology informatics at UPMC. “This partnership between CMU and UPMC is a perfect example of what can be accomplished when this happens.”

Communications of the ACM