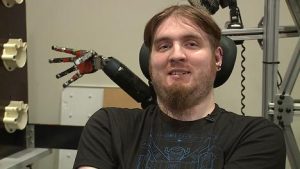 UPMC/University of Pittsburgh researchers’ latest work toward developing a prosthetic arm with a brain-computer interface was voted as the #1 most innovative idea in 2016 by the readers of STAT, a national publication focused on finding and telling compelling stories about health, medicine, and scientific discovery.  There were 32 total pioneering discoveries considered in the voting.

McGowan Institute for Regenerative Medicine affiliated faculty members Andrew Schwartz, PhD, distinguished professor of neurobiology and chair in systems neuroscience, Pitt School of Medicine, and a member of the University of Pittsburgh Brain Institute, Elizabeth Tyler-Kabara, MD, PhD, assistant professor, Department of Neurological Surgery, Pitt School of Medicine, and Michael Boninger, MD, professor of physical medicine and rehabilitation at Pitt, and senior medical director of post-acute care for the Health Services Division of UPMC, are all co-authors on the study published in 2016 in Science Translation Medicine entitled “Intracortical microstimulation of human somatosensory cortex.”

In the winter of 2004, Nathan Copeland (pictured, with the mind-controlled robotic arm behind him) who lives in western Pennsylvania, was driving at night in rainy weather when he was in a car accident that snapped his neck and injured his spinal cord, leaving him with quadriplegia from the upper chest down, unable to feel or move his lower arms and legs, and needing assistance with all his daily activities. Following a high school spent in advanced science courses, he was then 18 and in his freshman year of college pursuing a degree in nanofabrication.

After he passed the screening tests, Mr. Copeland was wheeled into the operating room last spring. Dr. Tyler-Kabara implanted four tiny microelectrode arrays each about half the size of a shirt button in Nathan’s brain. Prior to the surgery, imaging techniques were used to identify the exact regions in Mr. Copeland’s brain corresponding to feelings in each of his fingers and his palm.

The authors of the study suggest that this approach could be used to convey information about contact location and pressure necessary for prosthetic hands to interact with objects.