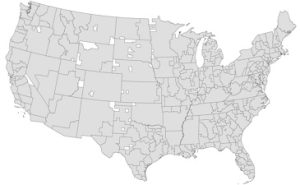 In response to repeated calls for an integrated and coordinated emergency and trauma care system in the U.S., University of Pittsburgh School of Medicine scientists and UPMC physicians—including McGowan Institute for Regenerative Medicine affiliated faculty member Derek Angus, MD, MPH, who is a co-author on the study—rose to the challenge and divided the nation into hundreds of referral regions that describe how patients access advanced care, in a way that respects geopolitical borders. Dr. Angus is Chair of the Department of Critical Care Medicine of both the University of Pittsburgh School of Medicine and the UPMC Healthcare System. At the University, he holds the rank of Distinguished Professor and the Mitchell P. Fink Endowed Chair in Critical Care Medicine with secondary appointments in Medicine, Health Policy and Management, and Clinical and Translational Science and he directs the CRISMA (Clinical Research, Investigation, and Systems Modeling of Acute Illnesses) Center. He also co-directs the UPMC ICU Service Center, responsible for the provision of ICU services across the 20-plus hospital system.

The Pittsburgh Atlas, published recently in the Annals of Emergency Medicine, creates the framework that will allow states and groups of counties to implement quality improvement programs accountable to regional performance measures instituted by state and local governments.

“Recent proposed changes to health care could shift more responsibility to the state level with regard to who is insured or what services are offered,” said lead author David Wallace, MD, MPH, assistant professor in Pitt’s Department of Critical Care Medicine. “A set of regions that maintain state lines is essential in that circumstance.”

More than a decade ago, a National Academy of Medicine report endorsed coordinated, regional, accountable systems as an approach to improve health care for severe acute conditions requiring trauma and emergency services. In 2013, the National Quality Forum highlighted the importance of region-level performance measures that promote timely, high-quality care.

The Pittsburgh Atlas was partially inspired by the Dartmouth Atlas of Health Care, a set of geographic regions based on Medicare and Medicaid hospital discharge claims that was created more than 20 years ago and is used for epidemiological studies that compare the cost, quality and consumption of health care in different parts of the country. However, the Dartmouth Atlas doesn’t respect state or county boundaries – resulting in a set of regions that do not promote coordination or accountability.

Dr. Wallace and his team built the Pittsburgh Atlas by looking at nearly 731,000 Medicare patients who sought care for a heart attack, stroke or moderate to severe trauma in 2011. Referral regions were created by combining patient home counties to hospital counties, allowing multiple patient home counties to join to the same hospital county. For example, the region containing Pittsburgh (dubbed “57”) consists of 22 counties stretching up the western side of Pennsylvania. It’s one of 16 referral regions in the state.

The research team determined six different ways to divide the U.S. into emergency care referral regions. After examining each result, they came away with the one that keeps the vast majority of patients closest to home and named it the “Pittsburgh Atlas.” It’s comprised of 326 referral regions.

“We were surprised at how well our regions performed in terms of keeping patients close to home – they did as well as those in the Dartmouth Atlas,” said Dr. Wallace, who also is a member of Pitt’s Clinical Research Investigation and Systems Modeling of Acute Illness (CRISMA) Center. “We truly expected there would be a greater trade-off since the Pittsburgh Atlas faced the additional geopolitical boundary constraints.”

Dr. Wallace acknowledged the Pittsburgh Atlas may not be representative for all patients. Although it was built using the largest collective source of hospitalizations for heart attack, stroke and major trauma in the U.S., it is primarily limited to patients 65 years old and older with data from 2011. Referral patterns may have changed with population changes and hospital openings and closings – meaning the Pittsburgh Atlas would need periodic updates.

Dr. Wallace and his team have made the data files for the Pittsburgh Atlas available so others can use it for projects that evaluate regional care delivery and seek to improve quality.

“This project gives researchers, policymakers, hospital systems and public health agencies a way to move beyond simply comparing apples to apples, and into thinking about orchards,” Dr. Wallace said.