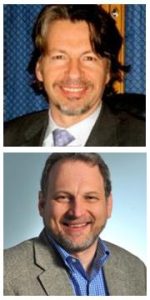 In a feat of medical and scientific coordination, doctors across 138 hospitals in seven countries shared treatment protocols and harmonized data collection of three clinical trials resulting in the most comprehensive analysis to date on care for sepsis, the leading killer of hospital patients worldwide. The international evaluation was overseen by physicians at the University of Pittsburgh School of Medicine, who expect the work to serve as a model for future research of this scale. McGowan Institute for Regenerative Medicine affiliated faculty members Derek Angus, MD, MPH, Distinguished Professor and Mitchell P. Fink Chair, Department of Critical Care Medicine at Pitt, and John Kellum, MD, Professor in the Departments of Critical Care Medicine, Medicine, Bioengineering, and Clinical and Translational Science at Pitt, are co-authors on the study.

When combined, the trials confirm that, even in acutely sick patients, the previously accepted, standardized approach to diagnosing and treating sepsis did not change survival chances for patients. The findings were announced at the 37th International Symposium on Intensive Care and Emergency Medicine in Brussels, Belgium, and published in the New England Journal of Medicine.

“These results are reassuring because we’ve already been changing sepsis care based on individual findings from the three trials,” said Dr. Angus, principal investigator of the U.S. trial, which was the first of the three to get funded. “What is truly inspiring is how we have collaborated across oceans to garner outcomes powerful enough to grant us this validation and confidence when caring for our sickest patients.”

Sepsis arises when the body’s response to an infection injures its own tissues and organs, sometimes progressing to septic shock. According to the National Institutes of Health, it may occur in more than 1 million U.S. patients every year, and—despite best practice—an estimated 28 to 50 percent of these people do not survive.

In 2008, the U.S.-based “Protocolized Care for Early Septic Shock” (ProCESS) trial, the U.K.-based “Protocolised Management in Sepsis” (ProMISe) trial, and the “Australasian Resuscitation In Sepsis Evaluation” (ARISE) trial, based in Australia and New Zealand, launched with federal funding from each country. They were designed to build on a 2001 study of 263 patients at a single Detroit hospital suggesting that early, goal-directed therapy (EGDT) reduced mortality from sepsis by 16 percent.

Before enrolling a single patient, the scientists leading each trial worked together to ensure that their trials tested treatments and collected information in a way that would make the findings compatible. In doing so, the scientists effectively tripled their data, allowing more detailed analyses compared to any single trial.

The combined meta-analysis of the three trials included 3,723 sepsis patients, approximately half treated with “usual care,” in which the bedside physician directs the course of treatment based on what he or she determines is best for the patient, and the other half treated with EDGT, which requires the clinician to follow a protocol that includes placing a catheter called a central line in the jugular vein to monitor blood pressure and oxygen levels, as well as delivery of drugs, fluids, and blood transfusions.

The meta-analysis determined that EGDT did not improve patient outcome and increased hospitalization costs when compared with usual care, supporting previously announced findings from the ProCESS trial. More simply stated, good early bedside sepsis care with therapies matched to severity is key, not use of a singular protocol.

“Randomized clinical trials are the gold standard of medicine, but are very difficult and expensive to perform, and are best when merged with data from other trials to get the best picture possible,” said Donald M. Yealy, MD, professor and chair of Pitt’s Department of Emergency Medicine and lead author of the previous ProCESS trial publication. “However, merging such data is a challenge because often the information is not collected consistently across trials. We planned ahead, two years before these three big sepsis trials started, and created an approach allowing each trial to not only stand on its own, but also be able to contribute to a ‘whole’ that is greater than the ‘sum of its parts.’”