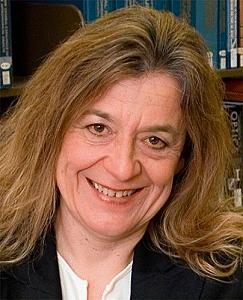 The work of McGowan Institute for Regenerative Medicine affiliated faculty member Anna Balazs, PhD, Distinguished Professor of Chemical Engineering and the Robert v. d. Luft Professor, Department of Chemical & Petroleum Engineering, University of Pittsburgh, is featured on the cover of the November 10, 2015, issue of the publication, Langmuir, the American Chemical Society Journal of Surfaces and Colloids.

Inspired by the collective behavior of slime molds and amoebas, we designed synthetic cell-like objects that move and self-organize in response to self-generated chemical gradients, thereby exhibiting autochemotaxis. Using computational modeling, we specifically focused on microcapsules that encompass a permeable shell and are localized on an adhesive surface in solution. Lacking any internal machinery, these spherical, fluid-filled shells might resemble the earliest protocells. Our microcapsules do, however, encase particles that can diffuse through the outer shell and into the surrounding fluid. The released particles play two important, physically realizable roles: (1) they affect the permeability of neighboring capsules and (2) they generate adhesion gradients on the underlying surface. Due to feedback mechanisms provided by the released particles, the self-generated adhesion gradients, and hydrodynamic interactions, the capsules undergo collective, self-sustained motion and even exhibit antlike tracking behavior. With the introduction of a chemically patterned stripe on the surface, a triad of capsules can be driven to pick up four-capsule cargo, transport this cargo, and drop off this payload at a designated site. We also modeled a system where the released particles give rise to a particular cycle of negative feedback loops (mimicking the “repressilator” network), which regulates the production of chemicals within the capsules and hence their release into the solution. By altering the system parameters, three capsules could be controllably driven to self-organize into a stable, close-packed triad that would either translate as a group or remain stationary. Moreover, the stationary triads could be made to switch off after assembly and thus produce minimal quantities of chemicals. Taken together, our models allow us to design a rich variety of self-propelled structures that achieve complex, cooperative behavior through fundamental physicochemical phenomena. The studies can also shed light on factors that enable individual protocells to communicate and self-assemble into larger communities.