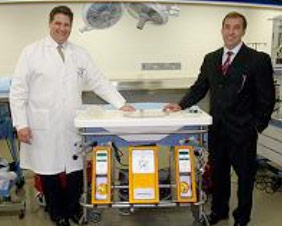 Researchers from the University of Pittsburgh’s Thomas E. Starzl Transplantation Institute at UPMC and the McGowan Institute for Regenerative Medicine have developed a new system for organ preservation based on machine perfusion with a cell free oxygen carrier solution at subnormothermic temperatures. This new system provides effective oxygenation to the organ even though it’s outside of the body, a process which alleviates the damage that comes with prolonged storage on ice.

More than 15,000 people are waiting for a liver transplant in the United States, but fewer than 7,000 will receive one this year. The conventional method of storing and transporting organs is not very effective. As a result, approximately 20 to 40 percent of donor livers cannot be transplanted into recipients because of extended injuries stemming from cold storage preservation. The further development of this new system for organ preservation could mean the difference between life and death for thousands of people on the organ donor waiting list if fully approved by the FDA for clinical use.

With the decline of government funding of scientific research, projects like this are increasingly reliant on people like you. The researchers from the Thomas E. Starzl Transplantation Institute at UPMC and the McGowan Institute for Regenerative Medicine want you to join their transplant team by visiting engage.pitt.edu/organicu and making a gift to support this important life-saving work today. As of the end of June 2015, the funding initiative has raised 12% of the targeted goal.