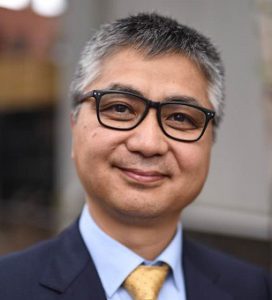 It seems like something straight out of a science fiction movie: humans wearing bionic technology to move more easily.

However, a University of Pittsburgh team—including McGowan Institute for Regenerative Medicine affiliated faculty member Kang Kim, PhD, associate professor of medicine and of bioengineering at the University of Pittsburgh and the Heart and Vascular Institute at UPMC—is turning fiction into a reality by helping people with paraplegia regain or improve mobility using robotic technology.

The team recently created a prototype hybrid exoskeleton. The hybrid aspect comes from the two types of technology being used in this project, with electrodes sending ultrasound noninvasively to make paralyzed muscles work while the battery-powered exoskeleton provides additional support to promote movement.

“We’re trying to create a situation where the patient controls the exoskeleton, not the other way around,” said Nitin Sharma, PhD, associate professor of mechanical engineering and materials science in Pitt’s Swanson School of Engineering and the team’s principal investigator.

Peter Ahwesh, who grew up in Pittsburgh and graduated from Pitt in 1995 with a bachelor’s degree in history, participated in Dr. Sharma’s study last year, before moving to North Carolina.

Mr. Ahwesh walked in the exoskeleton with balance support from a rolling walker. He has an incomplete spinal cord injury, meaning he has partial yet weakened movement of his legs.

While Mr. Ahwesh said he didn’t find the prototype especially comfortable, he said the research being done is fantastic. He walked in the exoskeleton before the Sharma Lab worked with ultrasound.

“I appreciate the research they’re doing at the Sharma Lab. There aren’t many places doing such a thing to improve people’s lives with these devices,” said Mr. Ahwesh.

However, Dr. Sharma’s research uses ultrasound, rather than electricity, delivered through sensors placed on the body. This aims to more accurately measure how much movement a target muscle group can generate. Ultrasound stimulates the tissue beneath the skin’s surface using high-frequency sound waves that cannot be heard by humans.

While the ultimate goal is to coordinate muscle movement for the entire leg, Dr. Sharma’s team is focusing on the ankle for now because it is “much more complicated” than other parts of the leg, Dr. Sharma said.

“Unlike the knee joint which moves in one direction, the ankle can be flexed in multiple directions and different muscles activate that joint,” Dr. Sharma said. “With electromyography, it’s very challenging because there is no correct place to put these sensors, so we want to use ultrasound to figure that out.”

Another member of the research team is Brad Dicianno, MD, medical director of the Human Engineering Research Laboratories and associate professor in Pitt’s Department of Physical Medicine and Rehabilitation.

The project is being funded by a $509,060 CAREER award from the National Science Foundation.

The prototype exoskeleton is being developed at Pitt’s Neuromuscular Control and Robotics Laboratory, also known as the Sharma Lab, and is wired to a power source. The final product will be able to function with a portable battery. In addition, the team is working on designs that will integrate these exoskeletons with wheelchairs and other mobility technologies.

Dr. Sharma said the team will next find out whether the exoskeleton affects neurological behavior and muscle mass in the legs. The team also aims to slim down the 17 kilogram (37.5 pounds) prototype to make the exoskeleton more user friendly.

“We added knee motors to the design, making it heavier. But we will be replacing many of our parts with aluminum and carbon fiber parts in the near future, so we are targeting a weight of under 12 kilograms (about 26.5 pounds) with the upgrades,” said Albert Dodson IV, PhD, a research associate in the Sharma Lab.

“Exoskeletons are heavy, so what we’re proposing is that since people will be using their muscles, you don’t need these big exoskeletons,” Dr. Sharma said. “And if you use both your own muscles and these exoskeletons, you could also save power and walk for longer periods of time.”