Dr. Andrew Schwartz: For BCIs to Be Useful, They’ll Need to Be Wireless

Home Cellular Therapy Dr. Andrew Schwartz: For BCIs to Be Useful, They’ll Need to Be Wireless

Dr. Andrew Schwartz: For BCIs to Be Useful, They’ll Need to Be Wireless 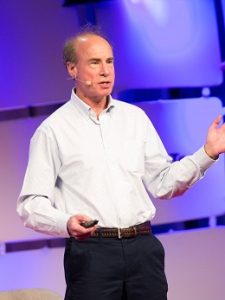 McGowan Institute for Regenerative Medicine faculty member Andrew Schwartz, PhD—Distinguished Professor of Neurobiology at the University of Pittsburgh with adjunct appointments at the Center for Neural Basis Cognition (a joint venture of the University of Pittsburgh and Carnegie Mellon University), at the Robotics Institute at Carnegie Mellon University, and at Pitt’s Department of Bioengineering and its Department of Physical Medicine and Rehabilitation—recently participated in MIT (Massachusetts Institute of Technology) Technology Review’s 17th Annual EmTech where this year’s most significant news on emerging technologies was examined.  Dr. Schwartz’s session featured “For Brain-Computer Interfaces to Be Useful, They’ll Need to Be Wireless.”

MIT Technology Review’s associate editor for biomedicine, Emily Mullin, MA, reported on Dr. Schwartz’s presentation.  She reports that for decades, brain-computer interfaces have been imagined as a way for people who are paralyzed or those who have lost arms to be able to do everyday tasks like brushing their hair or clicking a TV remote—just by thinking about it.  Such robotic devices exist today—so far, a handful of patients in research labs around the world have tried them, giving them a limited range of motions. Some of the patients treated by Dr. Schwartz and his collaborators include Tim Hemes, Jan Scheuermann, Nathan Copeland (photos of all here).  But researchers are still years away from making these devices practical for use in people’s homes, says Dr. Schwartz.

Today’s brain-computer interfaces involve electrodes or chips that are placed in or on the brain and communicate with an external computer. These electrodes collect brain signals and then send them to the computer, where special software analyzes them and translates them into commands. These commands are relayed to a machine, like a robotic arm, that carries out the desired action.

The embedded chips, which are about the size of a pea, attach to so-called pedestals that sit on top of the patient’s head and connect to a computer via a cable. The robotic limb also attaches to the computer. This clunky set-up means patients can’t yet use these interfaces in their homes.

To get there, Dr. Schwartz said, researchers need to size down the computer so it’s portable, build a robotic arm that can attach to a wheelchair, and make the entire interface wireless so that the heavy pedestals can be removed from a person’s head.  Dr. Schwartz said he hopes paralyzed patients will someday be able to use these interfaces to control all sorts of objects beyond just a robotic arm.

“Just imagine someone using telemetry going into a smart home and being able to operate all these devices merely by thinking about them,” he said.

Dr. Schwartz said he’s working on such a model with Draper Laboratory, based in Cambridge, MA, but hasn’t been able to get funding to move the project along.  “This is very much on the outskirts of science,” said Dr. Schwartz.

EmTech is an annual opportunity to discover future trends and to understand the technologies that will drive the new global economy.  It’s where tech, business, and culture converge, and where you gain access to the most innovative people and companies in the world. The 17th annual EmTech examined this year’s most significant news on emerging technologies.  MIT Technology Review events consistently attract senior-level business and technology decision makers who drive the global innovation economy.