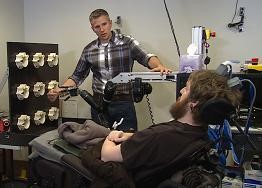 Imagine being in an accident that leaves you unable to feel any sensation in your arms and fingers. Now imagine regaining that sensation, a decade later, through a mind-controlled robotic arm that is directly connected to your brain.

That is what 28-year-old Nathan Copeland experienced after he came out of brain surgery and was connected to the Brain Computer Interface (BCI), developed by researchers at the University of Pittsburgh and UPMC. In a study published online in Science Translational Medicine, a team of experts led by Robert Gaunt, PhD, assistant professor of physical medicine and rehabilitation at Pitt, demonstrated for the first time ever in humans a technology that allows Mr. Copeland to experience the sensation of touch through a robotic arm that he controls with his brain.

“The most important result in this study is that microstimulation of sensory cortex can elicit natural sensation instead of tingling,” said study co-author McGowan Institute for Regenerative Medicine faculty member Andrew Schwartz, PhD, distinguished professor of neurobiology and chair in systems neuroscience, Pitt School of Medicine, and a member of the University of Pittsburgh Brain Institute. “This stimulation is safe, and the evoked sensations are stable over months.  There is still a lot of research that needs to be carried out to better understand the stimulation patterns needed to help patients make better movements.”

This is not the Pitt-UPMC team’s first attempt at a BCI. Four years ago, study co-author Jennifer Collinger, PhD, assistant professor, Pitt’s Department of Physical Medicine and Rehabilitation, and research scientist for the VA Pittsburgh Healthcare System, and the team demonstrated a BCI that helped Jan Scheuermann, who has quadriplegia caused by a degenerative disease. The video of Ms. Scheuermann feeding herself chocolate using the mind-controlled robotic arm was seen around the world. Before that, Tim Hemmes, paralyzed in a motorcycle accident, reached out to touch hands with his girlfriend.

But the way our arms naturally move and interact with the environment around us is due to more than just thinking and moving the right muscles. We are able to differentiate between a piece of cake and a soda can through touch, picking up the cake more gently than the can. The constant feedback we receive from the sense of touch is of paramount importance as it tells the brain where to move and by how much.

For Dr. Gaunt and the rest of the research team, that was the next step for the BCI. As they were looking for the right candidate, they developed and refined their system such that inputs from the robotic arm are transmitted through a microelectrode array implanted in the brain where the neurons that control hand movement and touch are located. The microelectrode array and its control system, which were developed by Blackrock Microsystems, along with the robotic arm, which was built by Johns Hopkins University’s Applied Physics Lab, formed all the pieces of the puzzle.

In the winter of 2004, Mr. Copeland, who lives in western Pennsylvania, was driving at night in rainy weather when he was in a car accident that snapped his neck and injured his spinal cord, leaving him with quadriplegia from the upper chest down, unable to feel or move his lower arms and legs, and needing assistance with all his daily activities. Following a high school spent in advanced science courses, he was then 18 and in his freshman year of college pursuing a degree in nanofabrication.

After he passed the screening tests, Mr. Copeland was wheeled into the operating room last spring. Study co-investigator, McGowan Institute for Regenerative Medicine faculty member, and UPMC neurosurgeon Elizabeth Tyler-Kabara, MD, PhD, assistant professor, Department of Neurological Surgery, Pitt School of Medicine, implanted four tiny microelectrode arrays each about half the size of a shirt button in Nathan’s brain. Prior to the surgery, imaging techniques were used to identify the exact regions in Mr. Copeland’s brain corresponding to feelings in each of his fingers and his palm.

At this time, Mr. Copeland can feel pressure and distinguish its intensity to some extent, though he cannot identify whether a substance is hot or cold, explains Dr. Tyler-Kabara.

McGowan Institute for Regenerative Medicine affiliated faculty member Michael Boninger, MD, professor of physical medicine and rehabilitation at Pitt, and senior medical director of post-acute care for the Health Services Division of UPMC, recounted how the Pitt team has achieved milestone after milestone, from a basic understanding of how the brain processes sensory and motor signals to applying it in patients

“Slowly but surely, we have been moving this research forward. Four years ago we demonstrated control of movement. Now Dr. Gaunt and his team took what we learned in our tests with Tim and Jan—for whom we have deep gratitude—and showed us how to make the robotic arm allow its user to feel through Nathan’s dedicated work,” said Dr. Boninger, also a co-author on the research paper.

Dr. Gaunt explained that everything about the work is meant to make use of the brain’s natural, existing abilities to give people back what was lost but not forgotten.

“The ultimate goal is to create a system which moves and feels just like a natural arm would,” says Dr. Gaunt. “We have a long way to go to get there, but this is a great start.”

The lead author on the research publication is Sharlene N. Flesher, of Pitt. Additional authors on this research are Stephen T. Foldes, PhD, Jeffrey M. Weiss, and John E. Downey, all of Pitt; and Sliman J. Bensmaia, PhD, of the University of Chicago.