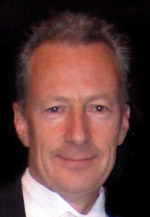 Organogenesis is the process by which internal organs are formed. This complex biological process takes place during the embryonic phase but, in some cases, is reactivated during regenerative processes like after an hepatectomy when the liver regenerates. In the lab of McGowan Institute for Regenerative Medicine faculty member Eric Lagasse, PharmD, PhD, Associate Professor in the Department of Pathology, University of Pittsburgh, with a secondary appointment in Pitt’s Clinical and Translational Institute, and Director of the Cancer Stem Cell Center at the McGowan Institute, researchers are working on a new paradigm for tissue remodeling and eventually organogenesis, by using lymph nodes as in vivo bioreactors to grow tissue or organ substitutes. Currently, the laboratory is involved in several tissue-remodeling experiments and more specifically in developing an ectopic liver in the lymph node.

The writers and producers of ABC’s hit show, Grey’s Anatomy, learned about the work of Dr. Lagasse and incorporated into this season’s story line the science behind the development of an ectopic liver in the lymph node.  On the show, Dr. Meredith Grey uses this knowledge behind her idea to generate new mini livers using lymph nodes for a “surgical innovation contest.” In the S14 E12 Harder, Better, Faster, Stronger episode she proposed to generate mini livers in lymph nodes for patients with end stage liver disease and the project was selected. Later, in subsequent episodes, Dr. Grey learns the science is patented and she must obtain the license to explore the possibility of further testing.  She does replicate the patent science in a mouse model, and the mouse survives.  Follow the story line this season here. 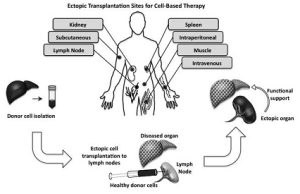 In many ways, lymph nodes are ideal bioreactors for growing new liver tissue.  They have an unusual capacity to expand.  They have ready access to the bloodstream, which nurtures new cells with nutrients as well as hormones and signally agents needed for growth.  And since the body has many lymph nodes, some can sacrifice their traditional duties to grow liver tissue.

This approach addresses some of the solutions to the development of complex 3-dimensional organs and in the future will be applied to repair tissue functions in several models of human disease, thus being not only limited to liver failure.

Illustration:  Ectopic transplantation sites. Several ectopic sites for cell therapy are shown. The generation of an ectopic organ involves transplanting healthy cells into an ectopic site such as the lymph node to provide support to a diseased or damaged organ.  Current Opinion in Organ Transplantation; 2014 Apr; 19(2): 169–174.