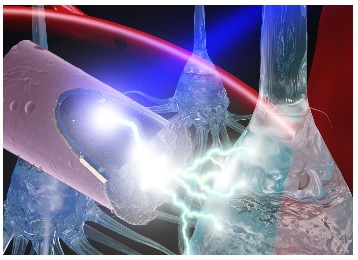 Neural stimulation is a pioneering technology that can be used to recover function and improve the quality of life for individuals who suffer from brain injury or disease. It serves an integral role in modern neuroscience research and human neuroprosthetics, including advancements in prosthetic limbs and brain-computer interfaces. A challenge that remains with this technology is achieving long-term and precise stimulation of a specific group of neurons.

McGowan Institute for Regenerative Medicine affiliated faculty member Takashi Kozai, PhD, assistant professor of bioengineering at the University of Pittsburgh, recently received a $1,652,844 award from the National Institutes of Health (1R01NS105691-01A1) to develop an innovative solution to address these limitations.

“Implantation of these devices causes a reactive tissue response which degrades the functional performance over time, thus limiting device capabilities,” Dr. Kozai explained. “Current electrical stimulation implants are tethered to the skull, which leads to mechanical strain in the tissue, and in turn, causes chronic inflammation and increases the possibility of an infection.”

Dr. Kozai, who leads the Bio-Integrating Optoelectric Neural Interface Cybernetics Lab in the Swanson School of Engineering, will use the NIH award to develop a wireless in vivo stimulation technology that will enable precise neural circuit probing while minimizing tissue damage. In this design, the electrode will be implanted in the brain and activated by light – via the photoelectric effect – with a far-red or infrared laser source, which can sit outside of the brain.

His group found that photostimulation drives a more localized population of neurons when compared to electrical stimulation under similar conditions. When used, the activated cells were closer to the electrode, which indicates increased spatial precision. The proposed technology will be smaller than traditional photovoltaic devices but larger than nanoparticles to improve device longevity.

“With this project, we hope to develop advanced neural probes that are capable of activating specific neurons for long periods of time and with great precision,” Dr. Kozai said. “This technology could significantly impact neuroscience research and ultimately the treatment of neurological injury and disease in humans.”

Illustration:  A laser shining onto an untethered, ultrasmall carbon fiber electrode to stimulate neurons via the photoelectric effect. Photo credit: J. Mater. Chem. B, 2015,3, 4965-4978 – Reproduced by permission of The Royal Society of Chemistry.