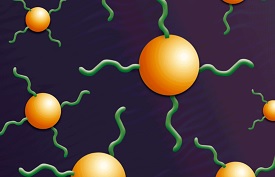 Carnegie Mellon University researchers—including McGowan Institute for Regenerative Medicine affiliated faculty member Krzysztof Matyjaszewski, PhD—have developed methods that speed up the process of developing chemically linked synthetic and biological molecules by more than 10 times in natural conditions. The findings, which marry biology and chemistry, could make the production of bioconjugates for use in biomedicine, materials science, and other fields more efficient and cost effective.

Bioconjugates are formed when a biological molecule is joined with another molecule using covalent bonds. For example, in the case of biologic drugs, like interferon, the drug is connected to polymers that act like a cloak of nano-armor that protects the drug from damage until it reaches its target.

While promising, making bioconjugates has been expensive, time consuming and difficult to control.

Alan Russell, PhD, the Highmark Distinguished Career Professor, a professor of chemical engineering, director of Carnegie Mellon’s Disruptive Health Technology Institute, and former founding director of the McGowan Institute, and Dr. Matyjaszewski, the J.C. Warner University Professor of Natural Science and a professor of chemistry, have discovered how to speed up the process and perform the chemistry of this process in truly natural conditions. Drs. Russell and Matyjaszewski co-direct the Center for Polymer-Based Protein Engineering at Carnegie Mellon.

Bioconjugates are traditionally made in solution, and purification after each step can take days or weeks. Even in the hands of a skilled scientist, it can take a week to make a few conjugates.

Drs. Russell and Matyjaszewski redesigned the chemistry for making bioconjugates to significantly decrease synthesis and purification time and made the approach so straightforward that even non-experts could create bioconjugates. The work—performed by a Carnegie Mellon team with Drs. Russell, Matyjaszewski, doctoral student Stefanie Baker, and researchers Hironobu Murata, PhD, and Sheiliza Carmali, PhD—builds on a technique called Atom Transfer Radical Polymerization (ATRP), a novel method of polymer synthesis developed by Dr. Matyjaszewski’s lab that has revolutionized the way macromolecules are made.

In a paper published in Nature Communications, they introduced the new method of growing polymers on proteins, known as Protein-ATRP on Reversible Immobilization Support (PARIS). It uses a “grafting-from” technique that exquisitely controls the growth of synthetic molecular hairs from the surface of proteins. These hairs can form a strong nano-armor that protects the biomolecule.

“The basic idea was inspired by classical respiration cycles operating in cells,” says Dr. Matyjaszewski, in an article for Nature Reviews Chemistry. “This is the first example of a fully oxygen-tolerant, well-controlled ATRP.”

These new methods of growing polymers and armoring proteins have the potential to affect many aspects of our daily lives.