By: The McGowan Institute For Regenerative Medicine | Category: Cellular Therapy, News Archive | May 17, 2017 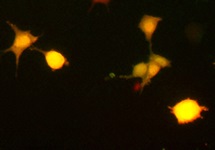 A novel gene therapy using CRISPR genome editing technology effectively targets cancer-causing “fusion genes” and improves survival in mouse models of aggressive liver and prostate cancers, University of Pittsburgh School of Medicine researchers report in a study published online recently in Nature Biotechnology.  McGowan Institute for Regenerative Medicine affiliated faculty members George Michalopoulos, MD, PhD, Professor and Chairman of the Department of Pathology at the University of Pittsburgh, and Satdarshan Monga, MD, Endowed Research Chair in Experimental Pathology and the Vice-Chair of the Division of Experimental Pathology, Department of Pathology at Pitt, are co-authors on the study.

“This is the first time that gene editing has been used to specifically target cancer fusion genes. It is really exciting because it lays the groundwork for what could become a totally new approach to treating cancer,” explained lead study author Jian-Hua Luo, MD, PhD, professor of pathology at Pitt’s School of Medicine and director of its High Throughput Genome Center.

Fusion genes, which often are associated with cancer, form when two previously separate genes become joined together and produce an abnormal protein that can cause or promote cancer.

Dr. Luo and his team had previously identified a panel of fusion genes responsible for recurrent and aggressive prostate cancer. In a study published earlier this year in the journal Gastroenterology, the team reported that one of these fusion genes, known as MAN2A1-FER, also is found in several other types of cancer, including that of the liver, lungs, and ovaries, and is responsible for rapid tumor growth and invasiveness.

In the current study, the researchers employed the CRISPR-Cas9 genome editing technology to target unique DNA sequences formed because of the gene fusion. The team used viruses to deliver the gene editing tools that cut out the mutated DNA of the fusion gene and replaced it with a gene that leads to death of the cancer cells. Because the fusion gene is present only in cancer cells, not healthy ones, the gene therapy is highly specific. Such an approach could come with significantly fewer side effects when translated to the clinic, which is a major concern with other cancer treatments such as chemotherapy.

To conduct the study, the researchers used mouse models that had received transplants of human prostate and liver cancer cells. Editing the cancer fusion gene resulted in up to 30 percent reduction in tumor size. None of the mice exhibited metastasis and all survived during the 8-week observation period. In contrast, in control mice treated with viruses designed to cut out another fusion gene not present in their tumors, the tumors increased nearly 40-fold in size, metastasis was observed in most animals, and all died before the end of the study.

The new findings suggest a completely new way to combat cancer. “Other types of cancer treatments target the foot soldiers of the army. Our approach is to target the command center, so there is no chance for the enemy’s soldiers to regroup in the battlefield for a comeback,” said Dr. Luo.

Another advantage over traditional cancer treatment is that the new approach is very adaptive. A common problem that renders standard chemotherapies ineffective is that the cancer cells evolve to generate new mutations. Using genome editing, the new mutations could be targeted to continue fighting the disease, Dr. Luo noted.

In the future, the researchers plan to test whether this strategy could completely eradicate the disease rather than induce the partial remission observed in the current study.