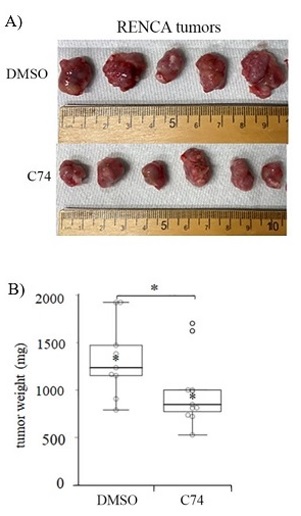 Kidney cancer will have been newly diagnosed in over 73,000 patients in the United States in 2020, resulting in nearly 15,000 deaths.1 Clear cell renal cell carcinoma (ccRCC) represents the most commonly diagnosed subtype of kidney cancer, accounting for more than 75% of new cases. Approximately 30% of ccRCC patients have metastatic disease at the time of diagnosis, and about 33% will develop recurrent or metastatic disease following treatment, indicating poor prognosis for the majority of ccRCC patients. The signature genetic lesion in ccRCC is the loss of the tumor-suppressing Von-Hippel Lindau (VHL) gene, which results in tumors marked by an abundant vascular microenvironment. With funding from an FY18 Kidney Cancer Research Program (KCRP) Idea Development Award – Established Investigator Option, McGowan Institute for Regenerative Medicine affiliated faculty member Partha Roy, PhD, Associate Professor of Bioengineering, Cell Biology, and Pathology at the University of Pittsburgh, set out to develop an in-depth molecular understanding of ccRCC-associated vascularization in an effort to exploit this phenomenon as a therapeutic target.

As described recently in the Journal of Biological Chemistry, Dr. Roy’s team—which included McGowan Institute affiliated faculty member Michael Lotze, MD, Professor of Surgery and Bioengineering, University of Pittsburgh, and Vice Chair of Research, Department of Surgery, University of Pittsburgh School of Medicine—analyzed data from The Cancer Genome Atlas and determined that increased levels of several cytoskeleton-regulating genes, including profilin1 (Pfn1), associated strongly with poor prognosis in ccRCC patients. The group observed that expression of Pfn1 is elevated primarily within the vascular endothelial cells (VEC; cells that form the walls of blood vessels) in the tumor microenvironment but also at a lower frequency within the tumor cells themselves. Using established VHL-deficient RCC cell line models, Dr. Roy’s team found that both proliferation and migratory behavior are reduced when Pfn1 is suppressed directly in tumor cells. In VEC, forced expression of Pfn1 caused the cells to export and deposit the protein in the growth media, suggesting that high Pfn1 expression in the VEC component of ccRCC tumors may affect the behavior of adjacent tumor cells. Indeed, when the team exposed RCC cells to recombinant Pfn1 protein in culture, the cells were stimulated to increase their migratory activity. Importantly, co-culture of RCC cells with VEC cells also led to increased migratory behavior, which could be inhibited by suppressing Pfn1 in the VEC population. These findings indicate that expression of Pfn1 within the tumor cells, and/or the associated VEC can elicit a pro-tumorigenic effect.

Dr. Roy’s team reasoned that Pfn1 expression in VEC and/or tumor cells, or released into the tumor microenvironment by VECs, may be an important and accessible therapeutic target for ccRCC patients. As Pfn1 acts primarily by promoting the growth of the actin-based cytoskeleton, the group developed a new small molecule inhibitor (C74) of the Pfn1-actin interaction and observed that RCC cells exhibit reduced proliferation and migration when treated with C74. In pilot preclinical testing, mice bearing RCC tumors were treated with localized injections of C74, which resulted in a significant reduction of tumor size compared to control treated animals. Notably, daily dosing with C74 did not result in discernible weight loss or other measurable side-effects in the treated mice.

Early results of this KCRP-funded research have demonstrated a proof of concept for specific targeting of Pfn1 in ccRCC based on the highly vascularized nature of the disease. The disruption of actin cytoskeletal dynamics by inhibition of Pfn1-binding reduces tumor cell growth capacity and cell motility, hallmarks of more aggressive kidney cancers, and may serve to slow or prevent metastatic progression. Dr. Roy’s work has the potential to translate into a promising new therapy to improve outcomes for the vast majority of patients diagnosed with ccRCC.

Illustration:  C74 inhibits kidney tumor growth in vivo. Mice bearing subcutaneous RENCA tumors, a mouse model of ccRCC, were treated daily with either control (DMSO) or the Pfn-1/Actin inhibitor C74. After 20 days, C74-treated tumors were found to be significantly smaller in size (A) and in weight (B), indicating a reduction in tumor aggressiveness.  Cell Biology Molecular Bases of Disease, Volume 295, Issue 46, P15636-15649, November 13, 2020.