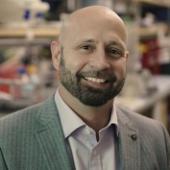 The Department of Defense isn’t what most people would associate with the field of transplantation science, but for McGowan Institute for Regenerative Medicine affiliated faculty member Hēth Turnquist, PhD (pictured), associate professor in the Department of Surgery and the Thomas E. Starzl Transplantation Institute, they are a major partner for his work. Since 2011, Dr. Turnquist has led a transplant immunology-focused research program that is working to understand how immune cells respond to tissue damage. Their goal is to now harness their new knowledge on the mechanisms the immune system uses to regulate the responses of other immune cells and complete tissue repair after injury for the benefit of transplant recipients.

One subset of immune cells that has been of particular interest to Dr. Turnquist’s team are regulatory T cells, also called Tregs. Tregs have long been known to have an important role in regulating or suppressing potentially detrimental immune responses and help prevent autoimmune disease.  Learning more about how to augment natural immunosuppression by Tregs to limit recipient immune response to grafts could be a key to reducing or eliminating chemical immunosuppressive drugs, which come with many difficult side effects.

Among his lab’s many discoveries, Dr. Turnquist’s studies have identified a unique and rare subset of Tregs that are suppressive, but also support tissue repair. These reparative Tregs (RepTregs) respond to signals released during injury to direct other cells to begin the tissue repair process and stimulate local tissue cell survival. The lab hopes that new findings such as these, combined with advances in surgery methods and bioengineering of drug delivery systems, will become the pathway towards inducing transplantation tolerance and reducing long-term tissue injuries leading to eventual loss of graft function.

Just where does the Department of Defense fit into this? According to Dr. Turnquist, there are more than 1600 U.S. military amputees as a result of missions during Operations Iraqi Freedom, Enduring Freedom, and New Dawn alone, with over one third being dual amputees. There are also an estimated 2 million Americans living with limb loss. A procedure called vascular composite allograft transplantation (VCA) can help by offering a transplantation of a functional unit of multiple tissues such as skin, muscle, tendon, nerve, and bone.  Example VCA transplants include hands and face transplants. However, the widespread use of VCA is limited by the toxicity and complications of the high-dose, multi-drug immunosuppression necessary to prevent graft rejection by the recipient’s immune system. Even when used at toxic doses these drugs fail to prevent transplant fibrosis that limits transplant function. Through Dr. Turnquist’s work to better understand RepTregs, he hopes to set the groundwork for new therapies with the potential to lead to clinical trials in the reduction of immunosuppression needed for VCA recipients, while also improving long-term graft functions.

Though human clinical trials are potentially 5-10 years away, if effective, these studies could potentially launch a new avenue of investigation and novel drugs that can harness potent repair pathways in damaged graft tissues. This would not only affect the quality of life for wounded military veterans, but many other patients worldwide who suffer from limb loss. Dr. Turnquist and his lab are on the frontlines of the search for new treatments to help those who were on the frontlines once themselves.