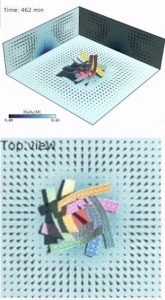 The spiral is pervasive throughout the universe — from the smallest DNA molecule to ferns and sunflowers, and from fingerprints to galaxies themselves. In science the ubiquity of this structure is associated with parsimony — that things will organize themselves in the simplest or most economical way.

Researchers from the University of Pittsburgh and Princeton University unexpectedly discovered that this principle also applies to some non-biological systems that convert chemical energy into mechanical action — allowing two-dimensional polymer sheets to rise and rotate in spiral helices without the application of external power.

This self-assembly into coherent three-dimensional structures represents the group’s latest contribution in the field of soft robotics and chemo-mechanical systems.

“Through computational modeling, we placed passive, uncoated polymer sheets around a circular, catalytic patch within a fluid-filled chamber. We added hydrogen peroxide to initiate a catalytic reaction, which then generated fluid flow. While one sheet alone did not spin in the solution, multiple sheets autonomously self-assembled into a tower-like structure,” Dr. Manna explained. “Then, as the tower experienced an instability, the sheets spontaneously formed an interweaving structure that rotates in the fluid.”

As Dr. Balazs pointed out, “The whole thing resembles a thread of twisted yarn being formed by a rotating spindle, which was used to make fibers for weaving. Except, there is no spindle; the system naturally forms the intertwined, rotating structure.”

Further analyzing the results, Dr. Manna found that tiny random fluctuations in the local concentration of the reactant create sufficient torque for the four sheets suspended in the fluid to be dragged upward, intertwine, and rotate. This interlinking phenomena occurs innately when the reactants and products have different volumes, which creates a density gradient in the presence of gravity.

“It was a surprise to see these simple 2D sheets form a complex spiral just by “sprinkling” reactant — such as a teaspoon of glucose — into the chamber,” Dr. Balazs said. “Doubling the number of sheets to eight increased the complexity of the spiral. We wondered if this was the tip of the iceberg — if we pressed further, could we develop the parameters to achieve various dynamic movements, which would be critical in programming soft robotics.”

Dr. Shklyaev added, “Devices are typically three-dimensional and not two, so by creating the design rules, we could increase the complexity of the rotating structures formed by the sheets. Anna provided the inspiration with the painting La Danse by Henri Matisse and asking if we could replicate the dancers’ poses.”

Drs. Manna and Shklyaev then added extensions to the four sheets, making t-shaped structures resembling outstretched arms. According to Dr. Shklyaev, changing the shape of the sheets enabled them to “tune” the sheets’ movement to resemble a coordinated circle dance.

According to Dr. Balazs, the researchers can quantify how the interlinked sheets should be designed and arranged, thereby enabling others to further develop more robust, scalable systems. Additionally, varying the shape of the container holding the fluid — which was rectangular in their modeling — provides another handle for tailoring the systems’ dynamic response.

“When you have a release of chemical energy into a fluid, it is then transduced into mechanical energy, which can perform specific actions. And although the process dissipates energy, simply adding another small amount of reactant reactivates it,” she said. “The next stage in our study is to program passive and active sheets to form other interwoven, three-dimensional structures, now that we know how to control their responses.”