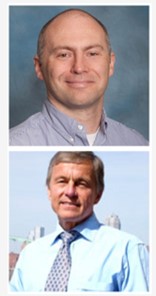 In a published report in Biomaterials entitled “Mapping the acute time course of immune cell infiltration into an ECM hydrogel in a rat model of stroke using 19F MRI,” McGowan Institute for Regenerative Medicine affiliated faculty members Michel Modo, PhD, Professor in the Department of Radiology at the University of Pittsburgh, and Stephen Badylak, DVM, PhD, MD, Professor in the Department of Surgery, Deputy Director of the McGowan Institute, and Director of the Center for Pre-Clinical Tissue Engineering within the Institute, and colleagues tagged peripheral immune cells using perfluorocarbon (PFC) nanoemulsions that afford their visualization by 19F magnetic resonance imaging (MRI). Prior to ECM hydrogel implantation, only blood vessels could be detected using 19F MRI. Using “time-lapse” 19F MRI, the study established the infiltration of immune cells into the peri-infarct area occurs 5–6 hours post-ECM implantation. Immune cells also infiltrated through the stump of the middle cerebral artery (MCA), as well as a hydrogel bridge that formed between the tissue cavity and the burr hole in the skull.

Tissue-based migration into the bioscaffold was observed between 9-12 hours with a peak signal measured between 12-18 hours post-implantation. Fluorescence-activated cell sorting of circulating immune cells revealed that 9% of cells were labeled with PFC nanoemulsions, of which the vast majority were neutrophils (40%) or monocytes (48%). Histology at 24 hours post-implantation, in contrast, indicated that macrophages (35%) were more numerous in the peri-infarct area than neutrophils (11%), whereas the vast majority of immune cells within the ECM hydrogel were neutrophils (66%). Only a small fraction (12%) of immune cells did not contain PFC nanoemulsions, indicating a low type II error for 19F MRI.