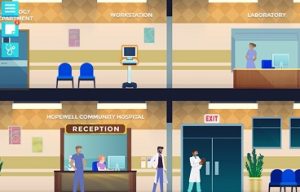 Playing an adventure video game featuring a fictitious, young emergency physician treating severe trauma patients was better than text-based learning at priming real doctors to quickly recognize the patients who needed higher levels of care, according to a new trial led by the University of Pittsburgh School of Medicine. McGowan Institute for Regenerative Medicine affiliated faculty member Derek Angus, MD, Chair of the Department of Critical Care Medicine of both the University of Pittsburgh School of Medicine and the UPMC Healthcare System and a Distinguished Professor and the Mitchell P. Fink Endowed Chair in Critical Care Medicine with secondary appointments in Medicine, Health Policy and Management, and Clinical and Translational Science, was a member of the study team.

The results, published by The BMJ, held even though doctors assigned to the game enjoyed it less than those assigned to traditional, text-based education. This indicates that if game enjoyment can be improved, the already favorable results might be enhanced.

“Physicians must make decisions quickly and with incomplete information. Each year, 30,000 preventable deaths occur after injury, in part because patients with severe injuries who initially present to non-trauma centers are not promptly transferred to a hospital that can provide appropriate care,” said lead author Deepika Mohan, MD, MPH, assistant professor in Pitt’s departments of Critical Care Medicine and Surgery. “An hour of playing the video game recalibrated physicians’ brains to such a degree that, six months later, they were still out-performing their peers in recognizing severe trauma.”

Dr. Mohan created the game Night Shift with Schell Games, a Pittsburgh-based educational and entertainment game development company. The game is designed to tap into the part of the brain that uses pattern recognition and previous experience to make snap decisions using subconscious mental shortcuts – a process called heuristics.

Physicians in non-trauma centers typically see only about one severe trauma per 1,000 patients. As a result, their heuristic abilities can become skewed toward obvious injuries such as gunshot wounds, and miss equally severe traumas such as internal injuries from falls. On average, 70 percent of severely injured patients who present to non-trauma centers are under-triaged and not transferred to trauma centers as recommended by clinical practice.

Both the game and the text-based learning are intended to help physicians improve their decision making regarding severe traumas. The game, however, sought to do this through narrative engagement, or the use of stories to promote behavior change, which has shown promise in recalibrating heuristics.

Dr. Mohan’s team recruited 368 emergency medicine physicians from across the country who did not work at hospitals with trauma specialization. Half were assigned to play the game and half were asked to spend at least an hour reading the educational materials.

Participants then responded to questionnaires and completed a simulation that tested how often they “under-triaged,” or failed to send severe trauma patients to hospitals with the resources necessary to handle them. Physicians who played the game under-triaged 53 percent of the time, compared with 64 percent for those who read the educational materials.

Six months later, Dr. Mohan reassessed the physicians and found that the effect of the game persisted, with those who played the game under-triaging 57 percent of the time, compared to 74 percent for those who had read the educational materials.

“There are many reasons beyond the doctor’s heuristics as to why a severe trauma patient wouldn’t be transferred to a trauma center, ranging from not having an ambulance available to a lack of proper diagnostic tools,” said Dr. Mohan. “So, it is important to emphasize that recalibrating heuristics won’t completely solve the under-triage problem and that the problem isn’t entirely due to physicians’ diagnostic skills. But it’s heartening to know we’re on track to develop a game that shows promise at improving on current educational training.”