Home Computations and Modeling Revealed: How Tooth Enamel Is Strong Enough to Last a Lifetime 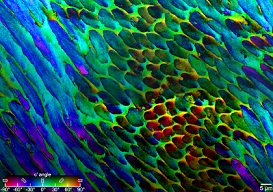 “We apply huge pressure on tooth enamel every time we chew, hundreds of times a day,” says Pupa Gilbert, PhD, professor of physics at the University of Wisconsin (UW)–Madison. “Tooth enamel is unique in that it has to last our entire lifetime. How does it prevent catastrophic failure?”

In new research published in the journal Nature Communications, Dr. Gilbert and her collaborators—including MIT engineering Professor Markus Buehler, PhD, and McGowan Institute for Regenerative Medicine affiliated faculty member and University of Pittsburgh oral biology Professor Elia Beniash, PhD—used advanced imaging techniques to see a clearer picture of the organization of individual enamel crystals in human teeth. They found that these crystals are not perfectly aligned, as had been previously thought, and that this misorientation likely deflects cracks, leading to enamel’s lifelong strength.

“Prior to this study, we just didn’t have the methods to look at the structure of enamel,” Dr. Gilbert says. “But with a technique that I previously invented, called polarization-dependent imaging contrast (PIC) mapping, you can measure and visualize in color the orientation of individual nanocrystals and see many millions of them at once. The architecture of complex biominerals, such as enamel, becomes immediately visible to the naked eye in a PIC map.”

Tooth enamel is organized in micron-length rods made up of long, skinny crystals of hydroxyapatite. Dr. Gilbert and her group at UW–Madison applied PIC mapping to several human tooth samples and measured the orientation of each crystal in tooth cross sections.

“By and large, we saw that there was not a single orientation in each rod, but a gradual change in crystal orientations between adjacent nanocrystals,” Dr. Gilbert says. “And then the question was, ‘Is this a useful observation?’”

To address that question, Dr. Gilbert collaborated with Dr. Buehler to perform computer simulations of chewing-like force to hydroxyapatite crystals. In the simulations, two blocks of crystals were placed together. Within each block, the individual crystals were aligned. But where they met — at the crystal interface — their orientation was rotated at different angles. The researchers then modeled the chewing force and watched how a crack propagated toward and through the interface.

“I started wondering, is there an ideal misorientation angle that is most effective at deflecting cracks?” Dr. Gilbert recalls. “The experiment to test this hypothesis could not be done at the nanoscale, nor by simulations, so I started thinking, okay, we trust evolution. If there is an ideal angle of misorientation, I bet it’s the one in our mouths.”

Cayla Stifler, a physics graduate student in Dr. Gilbert’s group and co-author of the study, went back to the PIC mapping data and measured the angular distance between every two adjacent pixels, generating millions of data points. She found that 1 degree was the most common misorientation angle, and that the angular distance never surpassed 30 degrees, consistent with the modeling result that a small misorientation angle is better than a larger one at deflecting cracks.

PIC mapping could be applied to teeth in the fossil record to observe trends in enamel evolution over time, or to compare enamel structures between animals to relate structure to function, such as how tooth structure differs between plant eaters and omnivores.

“Now we know that cracks are deflected at the nanoscale and thus can’t propagate very far,” says Dr. Gilbert. “That’s the reason our teeth can last a lifetime without being replaced.”