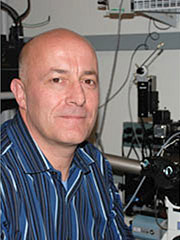 In celebration of his appointment, McGowan Institute for Regenerative Medicine affiliated faculty member Simon Watkins, PhD, Distinguished Professor of Cell Biology, School of Medicine, will present his inaugural lecture on September 15, 2016, at 4:00 pm in Scaife Hall, Lecture Room 6.  The title of his presentation is “From Little Animals to Moving Molecules.”

Dr. Watkins is the Founder and Director of the Center for Biologic Imaging at the University of Pittsburgh and a member of the Pittsburgh Cancer Institute. He is also Vice Chairman within the Department of Cell Biology. In addition to his responsibilities to the university, Dr. Watkins serves as a member of the Scientific Advisory Board, Starzl Transplant Institute.

The driving forces behind Dr. Watkins’ research are cutting edge optical imaging and their application to studying basic cell biologic processes in the immune system. Dendritic cells (DCs) are ubiquitous throughout the body, their primary function is as ‘danger’ detectors; the cells take up antigens from exogenous agents, process and present the antigen on the surface of the cell. Once exposed to antigen the cells mature, and migrate through the lymphatic drainage system to the lymph node where they present the antigen to effector cells of the immune system (such as cytotoxic T lymphocytes). Recently Dr. Watkins and his team showed that rather than acting in isolation, the DCs are actually physically interconnected through a network of extremely small tubules which allows clonal activation of populations of cells rather than each cell acting independently. Essentially, electrical connectivity between cells allows a single cell to activate several neighbors (over a distance of several hundred microns). These activated cells then migrate toward the signaling cell and take up and process antigen also. Once activated the cells lose their dendritic appearance prior to migrating through the lymphatics. Once at the lymph node they reassume their dendritic morphology. Dr. Watkins’ studies depend critically on an array of live cell imaging methods; ratiometric measures of calcium concentration, high resolution DIC, Live cell Confocal, Confocal, and 2P methods. These efforts are now being expanded to include the functional role of nanotubes in immune cross presentation.