Exploring the Future of Eye Transplantation

Exploring the Future of Eye Transplantation 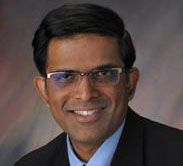 Although corneal transplants are routinely performed today, whole-eye transplantation has remained an unrealized goal in vision restoration because of challenges related to immune rejection and reestablishing the connectivity of the optic nerve to the visual centers in the brain. The Audacious Restorative Goals in Ocular Sciences (ARGOS) Consortium established at the University of Pittsburgh is the first cross-disciplinary, systematic attempt to explore strategies to enable corneal regeneration, retinal cell survival, long-distance optic nerve regeneration with cortical integration, and whole-eyeball transplantation.

As reported by Mark Roth, Pittsburgh Post-Gazette, McGowan Institute for Regenerative Medicine deputy director Vijay Gorantla, MD, PhD, associate professor of surgery in the Department of Plastic Surgery at the University of Pittsburgh, the administrative medical director of the Pittsburgh Reconstructive Transplant Program at UPMC, and a clinician who has helped pioneer Pitt’s hand and arm transplants, is the first to acknowledge that it will be years before surgeons can attempt whole eye transplants in human patients. But he says the approach has a key advantage over other attempts to repair traumatic injuries to the eye, whether they have come from a roadside bomb, an industrial accident, or a car collision. The eye is so complex that trying to repair its internal parts is an enormous challenge.

“The potential advantage of the eye transplant is you’re taking a whole eye with all its components, especially the retina,” Dr. Gorantla said. “You connect that to a residual optic nerve, if it’s present,” with the hope that the nerves from the donated eye will link up up successfully with the optic nerve going into the recipient’s brain.

One of the biggest potential barriers with eye transplants is that the retina in a donated eye will die off within 2 to 4 hours of being separated from its blood supply. That will put a premium on the donor being near the recipient, Dr. Gorantla said, and, as with face transplants, it may work best if the donor is brought into the same operating room as the recipient. In fact, for soldiers or others who have received devastating facial injuries, it might make sense to do a face and eye transplant at the same time, from the same donor, he said.

Another hurdle: The standard organ donor who has been declared brain dead may not work for eye transplants, because damage to the brain may harm the pathways from the eye to the brain’s visual centers. That could mean trying to find eyes from the much smaller pool of “cardiac death” donors, whose organs are taken immediately after the heart stops beating.

Compared to other organs and tissues, though, the eye has some biological advantages that make it less likely to be rejected by the recipient, Dr. Gorantla said, and that might mean patients won’t need as strong a dose of anti-rejection drugs, and the drugs could be put directly into the eye.

University of Pittsburgh School of Medicine researchers co-led by Dr. Gorantla and Joel Schuman, MD, chair of the Department of Ophthalmology, Pitt School of Medicine, and director of the UPMC Eye Center, were awarded $1.25 million from the U.S. Department of Defense (DOD) in late 2014 to fund two projects that aim to establish the groundwork for the nation’s first whole-eye transplantation program. Offered through the DOD’s Vision Research Program, the grants support conceptually innovative research that ultimately could lead to critical discoveries or major advancements. The Pitt researchers will lead a multidisciplinary consortium that includes clinicians and scientists from Harvard University and the University of California, San Diego.