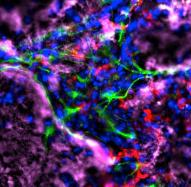 McGowan Institute for Regenerative Medicine affiliated faculty member Michel Modo, PhD, associate professor in the Department of Radiology at the University of Pittsburgh with secondary appointments in the Department of Bioengineering and the Center for Neural Basis of Cognition, is the co-author of a paper currently being published by Biomaterials.  The title of the paper is “ECM hydrogel for the treatment of stroke: Characterization of the host cell infiltrate.”

Per Dr. Modo, “As far as we are aware, this is the first time someone demonstrated the infiltration of host brain cells into a biomaterial in the brain.”

McGowan Institute for Regenerative Medicine deputy director Stephen Badylak, DVM, PhD, MD, professor in the Department of Surgery and director of the Center for Pre-Clinical Tissue Engineering within the Institute, is also a co-author on the study.

The abstract from the paper reads:

Brain tissue loss following stroke is irreversible with current treatment modalities. The use of an acellular extracellular matrix (ECM), formulated to produce a hydrogel in situ within the cavity formed by a stroke, was investigated as a method to replace necrotic debris and promote the infiltration of host brain cells. Based on magnetic resonance imaging measurements of lesion location and volume, different concentrations of ECM (0, 1, 2, 3, 4, 8 mg/mL) were injected at a volume equal to that of the cavity (14 days post-stroke). Retention of ECM within the cavity occurred at concentrations >3 mg/mL. A significant cell infiltration into the ECM material in the lesion cavity occurred with an average of ∼36,000 cells in the 8 mg/mL concentration within 24 h. An infiltration of cells with distances of >1500 μm into the ECM hydrogel was observed, but the majority of cells were at the tissue/hydrogel boundary. Cells were typically of a microglia, macrophage, or neural and oligodendrocyte progenitor phenotype. At the 8 mg/mL concentration, ∼60% of infiltrating cells were brain-derived phenotypes and 30% being infiltrating peripheral macrophages, polarizing toward an M2-like anti-inflammatory phenotype. These results suggest that an 8 mg/mL ECM concentration promotes a significant acute endogenous repair response that could potentially be exploited to treat stroke.