By The McGowan Institute For Regenerative Medicine | Awards and Recognition, News Archive | Comments are Closed | 15 December, 2016 | 0 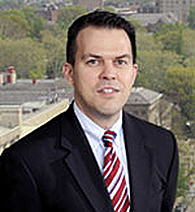 William R. Wagner, PhD, Director of the McGowan Institute for Regenerative Medicine and Professor of Surgery, Bioengineering & Chemical Engineering at the University of Pittsburgh, has been named a Fellow of the National Academy of Inventors (NAI).  Election to NAI Fellow status is the highest professional distinction accorded solely to academic inventors who have demonstrated a prolific spirit of innovation in creating or facilitating outstanding inventions that have made a tangible impact on quality of life, economic development, and the welfare of society. Academic inventors and innovators elected to the rank of NAI Fellow status have been nominated by their peers for outstanding contributions to innovation in areas such as patents and licensing, innovative discovery and technology, significant impact on society, and support and enhancement of innovation. The 2016 Fellows Gala and Induction Ceremony will take place as part of the NAI 6th Annual Conference on April 6, 2017, in Boston.

Dr. Wagner is chairman for the Tissue Engineering and Regenerative Medicine International Society (TERMIS) Americas and past-president of the American Society for Artificial Internal Organs (ASAIO). He is also the Founding Editor and Editor-in-Chief of one of the leading biomaterials journals, Acta Biomaterialia, and serves on the editorial boards of several journals in the biomedical engineering and regenerative medicine fields. Dr. Wagner’s innovations in the fields of cardiovascular devices and tissue engineering have been recognized by awards such as the Society for Biomaterials Clemson Award for Applied Research, the TERMIS Senior Scientist Award, selection to the “Scientific American 50,” the Chancellor’s Distinguished Research Award, and University of Pittsburgh Innovator Awards in 2007, 2008, 2009, 2010, and 2014 for licensing activity associated with his patents and patent filings.

Dr. Wagner holds 17 issued patents and an additional 25 patent filings in the field of cardiovascular biomaterials, medical devices, imaging, and tissue engineering. Five of his patents have been licensed by the University Office of Technology Management. Together with collaborator Dr. David Vorp and two former students, Dr. Wagner co-founded a company, Neograft Technologies, that has raised over $23M in funding to date. The company recently initiated clinical trials in Europe around an invention that creates a temporary elastic support system around veins prior to their use as arterial grafts in coronary artery bypass surgery. With the research group that he leads, Dr. Wagner has invented a series of new biomedical materials focused on biodegradable, elastic polymers that can be used to slow the dilatation of the heart following heart attack as well as in other applications, such as creating cardiac valves.

Under Dr. Wagner’s direction, the McGowan Institute is a leader in the commercialization of medical device and regenerative medicine technologies and has made an international impact on healthcare with its development of circulatory assist devices (including the current most commonly implanted ventricular assist device), pulmonary assist devices, and extracellular matrix based materials for regenerative repair and healing.  He has played an important role in the facilitation and nurturing of academic innovation and the transfer of this technology to positively impact society. The McGowan Institute has created 26 start-up companies that have attracted over $500M in external investment.  The McGowan Institute is also noteworthy for its numerous programs to aid its faculty in rapidly refining their innovation efforts by providing ready access to an executive-in-residence program for competitive landscape evaluation and business model development. This program, which has been supported by philanthropy and the University of Pittsburgh Innovation Institute has refined numerous nascent technologies and helped to refine business plans and technical approaches. The Institute has also been well ahead of its peers by its early integration of regulatory expertise into product development efforts. This acumen has aided the Institute as it has attracted major research and technology development grants from the Department of Defense in creating solutions for warfighter injuries, and in its partnering with industrial partners in the medical device and pharmaceutical space.