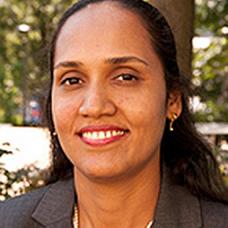 McGowan Institute for Regenerative Medicine affiliated faculty member Shilpa Sant, PhD, was named one of eleven of the 2017 Young Innovators of Cellular and Molecular Bioengineering (CMBE) and her work is featured in the October 2017 issue of the journal. As a 2017 CMBE Young Innovator, Dr. Sant will present her research in a special, two-part invited platform session at the 2017 Annual Meeting of BMES in Phoenix, Arizona.

Dr. Sant is an Assistant Professor in Pharmaceutical Sciences, with a secondary appointment in Bioengineering. Research in her lab focuses on developing physiologically relevant in vitro disease models and developing novel therapies to combat these diseases.

Building on this work, Dr. Sant and co-authors envision to create a three-dimensional valve calcification model using human cells so that it can be further extended for testing potential therapies. They also envision that self-regenerative cerium oxide nanoparticles will be a useful platform to balance ROS for many other diseases where excessive oxidative stress is implicated in disease progression.

Cellular and Molecular Bioengineering, an official journal of the Biomedical Engineering Society (BMES), publishes research that advances the study and control of mechanical, chemical, and electrical processes of the cell. Each year, the editors of CMBE dedicate the Young Innovators special issue to highlighting the work of assistant professors conducting innovative bioengineering research at the molecular, cellular, and multi-cellular level.

The 2017 Young Innovators of Cellular and Molecular Bioengineering