By The McGowan Institute For Regenerative Medicine | Awards and Recognition, News Archive | Comments are Closed | 1 November, 2018 | 0 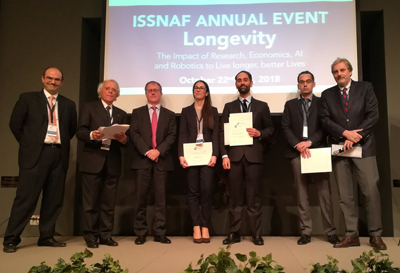 In pursuing its mission, the Italian Scientists and Scholars of North America Foundation (ISSNAF) grants specific focus to early stage investigators working in North America whose commitment to their discipline of study is innovative, impactful, and honors their country of origin.

McGowan Institute for Regenerative Medicine affiliated faculty member Antonio D’Amore, PhD, Research Assistant Professor in the Departments of Surgery and Bioengineering at the University of Pittsburgh, was selected as this year’s recipient of the ISSNAF Franco Strazzabosco Award for Young Engineers.  This award was established by the Strazzabosco family in 2013 in memory of their late father, Franco Strazzabosco.  It is a tribute to the entrepreneurial courage of Italian engineers, who strive in applying scientific discoveries to public advantage.

On November 8, 2018, at the Italian Embassy in Washington, DC, Dr. D’Amore will be honored with the Medaglia di Rappresentanza del Presidente della Repubblica Italiana and receive a prize of $3,000.

Dr. D’Amore thanked William Wagner, PhD, Director of the McGowan Institute, for his “invaluable mentorship over the years. A personal success never belongs to one person only,” said Dr. D’Amore.