By The McGowan Institute For Regenerative Medicine | Awards and Recognition, News Archive | Comments are Closed | 28 November, 2016 | 0 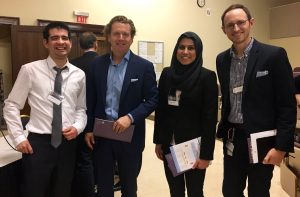 Second place in the 2016 competition went to a team from the lab of McGowan Institute for Regenerative Medicine faculty member Bryan Brown, PhD, Assistant Professor in the Department of Bioengineering with a secondary appointment in the Department of Obstetrics, Gynecology, and Reproductive Sciences at the University of Pittsburgh.  The team was selected as one of seven finalist groups from 35 initial applicants.  They won 2nd place ($10,000) based upon their pitch to a group of local VC’s, consultants, and Michael Wells.  The prize was awarded in front of a large crowd at SCIENCE 2016.

Students (individually or as a team) were given the opportunity to present their ideas at the “First Look” Technology Showcase in October 2016, and compete for the $20,000 Michael G. Wells Entrepreneurial Scholars Award to help move their idea towards commercialization. A $10,000 second place and $6,000 third place were also awarded. The “First Look” Technology Showcase is an annual event hosted by the Innovation Institute that provides University innovators the opportunity to present their ideas to an audience of investors, entrepreneurs, regional economic development representatives, local business executives, and Pitt alumni. Details about the program are available here.