A Possible End to Eye Drops

A Possible End to Eye Drops 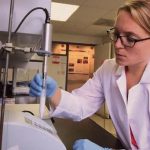 As reported by Carrie Fogel in the Fall 2015 Sight & Sound newsletter of the Eye and Ear Foundation of Pittsburgh, the Louis J. Fox Center for Vision Restoration is well known for engaging scientists of various backgrounds. Such collaborations help to ensure the success of vision restoration, which is the goal of the unique Ocular Tissue Engineering and Regenerative Ophthalmology (OTERO) Fellowship that is offered each year. Fellows, with backgrounds other than ophthalmology, are tasked with using a multi-disciplinary approach to pursue a ‘revolutionary’ idea that, if successful, will provide radical improvement in the treatment or prevention of vision impairment. One former OTERO fellow and currently an Assistant Professor of Chemical and Petroleum Engineering and of Ophthalmology, Morgan Fedorchak, PhD (pictured), who has a PhD in Bioengineering from the University of Pittsburgh, had one such revolutionary idea; one that is generating excitement and anticipation from scientists, physicians, and patients alike.

Glaucoma is the second leading cause of blindness worldwide and it can painlessly and irreversibly damage one’s optic nerve to the point of permanent loss of vision. Dr. Fedorchak decided to tackle one of the most frustrating problems that both doctors and patients experience with glaucoma treatment; the frequent use of topical eye drops. Teaming with McGowan Institute for Regenerative Medicine faculty members Joel Schuman, MD, Chairman of the Department of Ophthalmology, and Steven Little, PhD, Chairman of the Department of Chemical and Petroleum Engineering, Dr. Fedorchak found that the current method of applying drops several times per day is frustrating and creates a higher risk of not adhering to the treatment. Another concern Dr. Fedorchak noted, “Was the matter of systemic absorption, meaning that once the drug was placed on the eye, it was absorbed by the bloodstream, and thus, there was a chance for complications or negative reactions.”

Dr. Fedorchak’s goal was to create a once-a-month controlled-release treatment of a glaucoma drug that is both convenient and comfortable. To accomplish this, Dr. Fedorchak used her engineering background to create a substance, which has two components: “You start with a liquid drop, which is administered just like an eye drop and then turns into a gel at body temperature. The gel then settles in the lower eyelid, allowing the eye to move around normally without seeing the gel. It stays in place, is non-degradable, and extremely safe. Secondly, within the gel are polymer microspheres, which are the drug-releasing component. The microspheres break down over time, releasing medication steadily at the ideal rate for drug delivery. By the end of 1 month, when the drug completes the delivery, the gel can be removed and a new drop can be instilled,” states Dr. Fedorchak.

Once the gel was developed, it was tested in an animal study. In the animal model, the drug-loaded drop was placed in one eye and tested against animal subjects that received the standard treatment of twice-daily drops in one eye. Dr. Fedorchak observed three important results that indicated how successful this new therapy could be. “The biggest thing is safety: we did not notice any infection, irritation, or anything on a cellular level that would indicate damage. We also saw that the actual efficacy of the treatment (judged by monitoring the intraocular pressure (IOP) in the subjects) saw comparable results to those subjects who received the regular drops twice each day.” Third and most interestingly, was that the eye that received treatment experienced a drop in pressure and the untreated eye was unaffected, whereas in the subjects who received standard drops, the untreated eye also had low pressure, which indicates that it was absorbed systemically and could potentially produce negative side effects. The gel importantly stays where it needs to be, with less access to systemic circulation and more access to the affected tissues than the standard drugs. The gel uses 100 times less drug over the course of a month, ultimately preventing patients from taking more medication than needed.

Clearly, this new drug delivery system has the potential to change the way ophthalmic drugs are administered to patients. Dr. Fedorchak and her team are on the cusp of submitting an Investigational New Drug (IND) application to begin a clinical trial and are also exploring other applications for the gel, such as post-operative treatment, which might prevent patients from needing to fill a prescription to manage their post-operative care. Dr. Fedorchak is also collaborating with Deepinder Dhaliwal, MD, Professor of Ophthalmology, using drops to deliver antibiotics following cataract surgery. The team has also submitted a patent application for this new technology, which, if approved, will be a monumental success for the entire Ophthalmology Department at the University of Pittsburgh and its efforts to bring this technology to patients through commercialization.