2016 Beckman Scholar: To Further Her Research in Tissue Engineering Innovations

Awards and Recognition 2016 Beckman Scholar: To Further Her Research in Tissue Engineering Innovations

2016 Beckman Scholar: To Further Her Research in Tissue Engineering Innovations 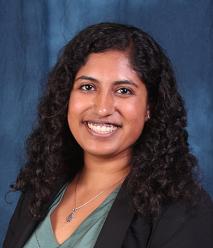 University of Pittsburgh’s 2016 Beckman Scholar—senior Uma Balakrishnan—is working toward a medical career and seeks to make significant contributions to research in human tissue engineering.  Ms. Balakrishnan’s research focuses on finding new methods for producing high-cell density tissues in laboratory settings. Working within the lab of McGowan Institute for Regenerative Medicine affiliated faculty member Lance Davidson, PhD, Associate Professor and Wellington C. Carl Faculty Fellow in the Department of Bioengineering, she is looking for alternative methods of tissue generation, which could have an impact in organ repairs and transplantation.

“Genetic and tissue engineering have made huge technological leaps over the past decade. We have enormous potential to affect human development, and I see tissue engineering as the next frontier for medical advancement,” said Ms. Balakrishnan, a bioengineering major within the Swanson School of Engineering. “I look to one day be at the cutting edge of researching and implementing relevant clinical applications for tissue engineering, playing an active role in the development of natural biological mechanisms for disease prevention and treatment.”

The scholarship provides as much as $26,000 in funding for 16 months of research, consisting of two consecutive summer semesters as well as the intermediate academic year. Scholars present their work to Pitt’s Beckman Scholars Steering and Selection Committee as well as at national conferences and in scholarly journals. Pitt’s University Honors College oversees the University’s Beckman Scholars Program.

“Arnold O. Beckman was an accomplished scientist, and his wife, Mabel M. Beckman, was a world-renowned philanthropist…,” said University Honors College Dean Edward M. Stricker, who serves as director of Pitt’s Beckman Scholars Program. “Through the Beckman Scholars Program Award, the University of Pittsburgh continues to support its community of undergraduate researchers with unique opportunities that pave the way for careers in scientific advancement and innovation.”

Established in 1977, the Arnold and Mabel Beckman Foundation is an independent, nonprofit organization that promotes research in the life-science fields.