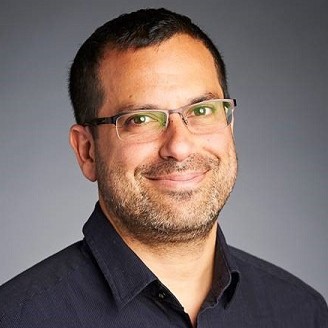 The ability to target and stimulate neurons brings a host of benefits including better understanding brain function and treating neurological diseases. Currently, state-of-the-art microelectrode arrays (MEAs) can stimulate neurons with high precision, but they lack cell-type specificity and require invasive implantation that can result in tissue damage—think stimulators used to help patients with tremors. McGowan Institute for Regenerative Medicine affiliated faculty member Tzahi Cohen-Karni, PhD, associate professor of materials science and engineering and biomedical engineering at Carnegie Mellon University, and his team have been exploring new materials to allow remote photostimulation, or the use of light to stimulate cells.

Cells can “talk” with one another by sending and receiving electrical signals. Inside a cell’s membrane, a neuron in our brain for example, there are tiny pores called ion channels that let ions move in and out of the cell. Under normal conditions, the fluxes of ions across the membrane dictate whether a cell will send an electrical signal to its neighbors. In recent years, researchers have shown that it is possible to use pulses of light to alter the cell membrane’s properties and elicit an electrical signal that can control cellular communication. Dr. Cohen-Karni’s team aims to identify materials effective at controlling cell activities without causing distress. They recognized that multi-dimensional graphene (fuzzy graphene) posed as a great candidate for cellular stimulation but found that some materials were difficult to produce and couldn’t absorb enough light to efficiently transfer light to heat.

In his current research published by the American Chemical Society, Dr. Cohen-Karni focused on transition metal carbides/nitrides (MXenes) flakes, a unique two-dimensional nanomaterial discovered by Yury Gogotsi’s team at Drexel University. MXenes have been demonstrated to exhibit outstanding mechanical properties, high electrical conductivity, and excellent electrochemical properties, and they are easy and inexpensive to produce.

Rather than study the material for its bulk properties, Dr. Cohen-Karni’s team measured the photothermal properties of the material at a single flake level. The team dispersed flakes on the surface of dorsal root ganglion (DRG), cells in the peripheral nervous system, and illuminated them with short pulses of light. By studying the interface between cells and materials it became clear that flakes would not be absorbed by the cells, and Dr. Cohen-Karni could accurately measure the amount of light required to create cellular change.

“What is really unique about the materials that we are using in my lab is that we don’t need to use high energy pulses in order to get an effective stimulation,” Dr. Cohen-Karni explained. “By shining short pulses of light on the DRG-MXene interface, we found that the electrophysiology of the cell was successfully altered.”

So, what does this mean for the future of neurology? With an increased understanding of how to achieve neural stimulation and the ease of MXene production, researchers can more efficiently practice remote photostimulation. For example, researchers could embed MXenes into artificial tissue engineered in the form of a brain, and then use light to control the neural activity and further uncover the role of neurons in brain development. Eventually, this material could even be used as a non-invasive treatment for neural function disabilities, like tremors.