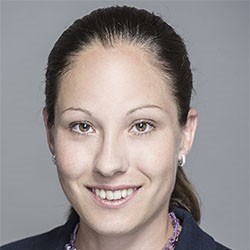 Many hearing loss patients have the same complaint: They have trouble following conversations in a noisy space. Carnegie Mellon University’s (CMU’s) Barbara Shinn-Cunningham, PhD, has spent her career conducting research to better understand this problem and how it affects people at cocktail parties, coffee shops, and grocery stores.

Now, along with a team of researchers from six universities, Dr. Shinn-Cunningham, the director of CMU’s Neuroscience Institute (NI) and the George A. and Helen Dunham Cowan Professor of Auditory Neuroscience, is looking for answers in an unexpected place. The researchers will conduct noninvasive experiments on free-swimming dolphins and sea lions.

To develop those methods, the research team turned to McGowan Institute for Regenerative Medicine affiliated faculty member Jana Kainerstorfer, PhD (pictured), a CMU associate professor of biomedical engineering and an expert in multimodal imaging techniques. She and her team are currently investigating ways to apply the technologies, which are commonly used in humans, to sea lions.

“By using inherently noninvasive methods, we are able to learn something about the animals’ behavior and brain processing without interfering with their behavior,” Dr. Kainerstorfer said. “It’s incredible to have people from such diverse backgrounds come together and work on a common problem.”

Dolphins and sea lions hear differently than humans, but the way their brains make sense of sound could help Dr. Shinn-Cunningham and her team better understand the cognitive and neural mechanisms of sound processing. The researchers have received a Multidisciplinary University Research Initiative grant from the Department of Defense to investigate how animals understand and respond appropriately to the cacophony reaching their ears.

Working with a world expert on dolphin behavior, they will train dolphins to identify targets, shapes such as a spheroid or a cross, and then ask the dolphin to identify the target from among similar, distracting shapes using their special auditory sense: echolocation. By engineering the distractor shapes to be more or less like the target, the experimenters will determine what sound features the dolphins use to “see” with sound.

In a different series of studies, the team will explore whether dolphins, like humans, learn to anticipate repeating patterns in sound, a critical step in making sense of complicated sounds in noisy settings. In this work, they will use electroencephalography (a technology used routinely with humans in laboratories and clinics) to measure neural responses from the dolphins to see if the brain shows a surprise signature when the ongoing sound pattern changes.

Later, the scientists will use sea lions to investigate whether, as in humans, different brain networks calculate the location of a sound versus the meaning of a sound. They will train the animals to respond to where a sound comes from (left or right) or what the sound is (e.g., the call of another sea lion or the sound of the trainer’s voice). Using near-infrared spectroscopy, the same technology often used in doctor’s offices on human fingertips to determine oxygen levels, the researchers will examine whether the brain regions engaged when listening to the same sounds change depending on what the sea lion is calculating.

Dr. Shinn-Cunningham said that the research could point to new approaches to developing hearing aids and other assistive listening devices, along with other benefits.

“Developing noninvasive ways of monitoring brain function in these marine mammals, including when in the wild, can give us insight into how these animals navigate in and make sense of their undersea world, which is important to conservation efforts,” she said. “Additionally, learning how the brains of our marine cousins process complex acoustic scenes, and how that is similar or different to auditory processing in humans, can give us a deeper understanding of human hearing. I appreciate that we have access to phenomenal, accredited research facilities for this work.”