Current News One Researcher’s Path to Control a Machine with a Brain: Dr. Andrew Schwartz’s Experience 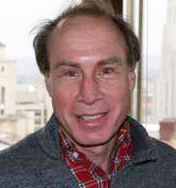