Controlling the Output Signals of the Basal Ganglia

Controlling the Output Signals of the Basal Ganglia

By The McGowan Institute For Regenerative Medicine | Computations and Modeling, Current News | Comments are Closed | 6 October, 2021 | 0 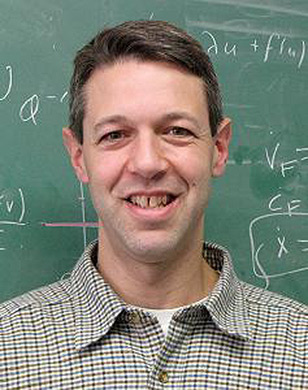 McGowan Institute for Regenerative Medicine affiliated faculty member Jonathan Rubin, PhD, Professor and Chairman in the Department of Mathematics and adjunct professor with the Department of Computational and Systems Biology at the University of Pittsburgh, is a co-principal investigator on a three-year Collaborative Research in Computational Neuroscience Grant, funded by the NIH National Institute of Neurological Disorders and Stroke.  Dr. Rubin and co-principal investigator Aryn Gittis, PhD, from Biological Sciences at Carnegie Mellon University, will work together on the project entitled “Diverse effects of GABAergic inputs on a basal ganglia output center.”

Drs. Rubin and Gittis will study control of the output signals of the basal ganglia, which is a brain area involved in action selection and reward-based learning.  The project will combine recordings from neurons with data analysis and mathematical modeling to understand the origins of surprisingly diverse firing patterns of these neurons as well as changes that occur during dopamine depletion associated with conditions like Parkinson’s disease (PD).  The work could have implications for the development of new therapies for PD.

The basal ganglia are a collection of subcortical nuclei studied for their contributions to movement, action selection, habit formation, and reward learning as well as their dysfunction in movement disorders. While basal ganglia processing of cortical inputs and the emergence of the direct and indirect pathway communication channels within the striatum have been the subject of extensive investigation, the integration of these channels at the level of basal ganglia output nuclei including the substantia nigra pars reticulata (SNr) has been relatively understudied. This imbalance is problematic for our understanding of basal ganglia function, because basal ganglia impacts on other areas of the nervous system, and hence on behavior, are funneled through basal ganglia output nuclei and depend on how they process the signals they receive. This project will build on and test ideas recently proposed based on computational and experimental work from the PIs’ groups to investigate SNr activity in ways that redress this knowledge gap. Specifically, this work will advance our knowledge about: how SNr neuron responses to GABAergic inputs from a major source, the external segment of the globus pallidus (GPe) in the indirect pathway depend on SNr neuron characteristics, the locomotor state of the subject, and dopamine levels; how they are expected to impact dynamics at the level of the SNr network and its outputs; the extent to which chloride dynamics and its effect on the GABA reversal potential give rise to these behaviors; and how these factors contribute to the delta band oscillations that emerge in SNr specifically under dopamine depletion. These advances will be achieved via an interdisciplinary approach of model development, simulations, and analysis done in synergy with experiments in slice and in vivo in mice involving optogenetics, neural recording, pharmacological manipulations, and behavior across control and dopamine-depleted conditions. RELEVANCE: Basal ganglia dysfunction contributes to a range of disorders including Parkinson’s disease, which is characterized by significant dopamine depletion. The proposed research will provide new insights about how dopamine depletion alters communication among key neural populations within the basal ganglia, as well as output signaling from the basal ganglia, which can impact motor behavior. These findings will supply information that is of direct utility in the search for therapeutic targets and the development of efficient, effective brain stimulation paradigms to reduce the motor complications of Parkinson’s disease.