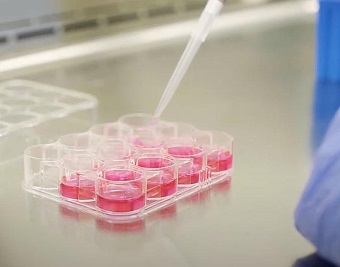 DNA viruses, such as herpesviruses and poxviruses, are among the most prolific and deadly viruses on Earth. Their ability to proliferate widely is due in large part to the way these viruses incubate in the body. Many DNA viral infections can enter what’s known as a latent state, in which the person does not experience symptoms of illness, though the virus is still present and able to reactivate to a proliferative state later. Latent viral infections also express different markers than the proliferative phenotypes, rendering them invisible to current treatments and screening.

It was this latent property of DNA viruses that got Sarah Hargett, Carnegie Mellon University (CMU) undergraduate student, thinking about another deadly disease: ovarian cancer. Like DNA viruses, cancer cells can also enter a latent form known as quiescent cancer, in which the cells are not dividing, but lay dormant in the body. These cancer cells are usually present either in the early stages of tumor progression or left behind after treatment. This latter form is especially dangerous, as it can lead doctors to believe that certain treatments were successful and a patient is cancer-free, only to have the cancer return later, at a time when the patient may no longer be seeking treatment.

“These quiescent cancer cells, also called cancer stem cells, are often chemotherapy resistant after reactivation,” writes Ms. Hargett, a chemical engineering and biomedical engineering (ChemE/BME) student, who is advised by Kris Dahl, PhD, CMU Professor of Chemical Engineering and an affiliated faculty member of the University of Pittsburgh’s McGowan Institute for Regenerative Medicine. “The ability of these cells to enter a silent or ‘dormant’ phase before reactivation is like DNA viral infections such as Epstein Barr Virus, Herpes Simplex Virus and Kaposi’s Sarcoma-associated Herpesvirus, which infect cells and then enter a latent phase.”

The apparent similarities between latent DNA viral infections and quiescent cancer sparked a new project: to do a deep dive into the current research on both phenomena to identify commonalities in hopes of finding new potential treatment options for sufferers of ovarian cancer from different areas of medicine.

“Quiescent cancer cells haven’t been studied much yet, and the published information on this disease state is somewhat limited,” says Ms. Hargett. “By comparing the two, we hope to identify similarities that could then be targeted by therapeutics that are novel to both diseases, or that are currently used on one but not the other.”

In particular, Ms. Hargett’s review examined five of the genes expressed in both disease states, and the effects of inhibiting each of these genes on disease expression. Of these five, one gene in particular (DAXX/ATRX) was the only one to show the same result for both cancer quiescence and viral latency, suggesting that targeting this gene could one day prove a viable treatment option.

“Knockdown or inhibition of these genes induces a change to promote the proliferative or lytic infection phenotype, which can be targeted by conventional cancer therapies or antiviral treatments,” Ms. Hargett writes. “These genes in particular suggest viable therapeutic targets due to their roles as epigenetic regulators.”

In October of 2020, Ms. Hargett presented her research at the Biomedical Engineering Society Annual Meeting (BMES), which was held virtually due to the ongoing COVID-19 pandemic.

“The BMES conference was entirely virtual this year, which was definitely different from previous years’ in-person conferences,” Ms. Hargett says. “However, there were still many opportunities to interact with faculty and other students from programs around the country, and to learn about research projects at these schools.”

This research is currently based largely on review and comparison of existing literature, but Ms. Hargett’s next steps will be to quantitatively assess cells through benchtop experiments and epigenetic sequencing for quiescent cancer cells, as well as a more robust assessment of latent DNA viral infections. Some of this work has been done already by Dr. Dahl’s collaborators at Magee Women’s Hospital of UPMC, and additional experiments will help to support these findings.