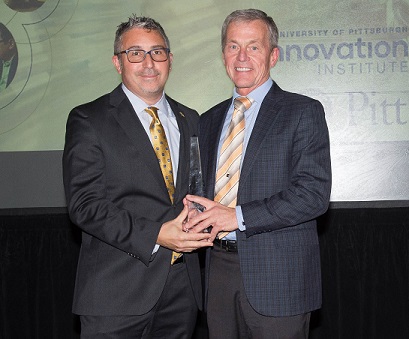 Stephen Badylak, DVM, PhD, MD, Deputy Director of the McGowan Institute for Regenerative Medicine, is the recipient of the 2018 Marlin Mickle Outstanding Innovator Award.  During the Innovation Institute’s Celebration of Innovation on December 3, 2018, Dr. Badylak was presented with this prestigious honor.

The Innovation Institute established the Outstanding Innovator Award in 2016 to recognize the lifetime achievements of Pitt faculty who have made an impact through the commercial translation of their research. It is named for Marlin Mickle, who holds the University record for invention disclosures filed, patents issued, and startups formed. Dr. Badylak’s record of innovation and entrepreneurship is remarkable and ranks among the most prolific in the history of the University. Importantly, his innovations in regenerative medicine have been used to facilitate the treatment of over 10 million patients and holds the potential to improve the lives of countless more around the world.  Watch this video of Dr. Badylak and his notable story.

Dr. Badylak is a Professor in the Department of Surgery, a Deputy Director of the McGowan Institute for Regenerative Medicine, and Director of the Center for Pre-Clinical Tissue Engineering within the Institute.

Dr. Badylak holds over 60 U.S. patents, 300 patents worldwide, has authored more than 350 scientific publications and 40 book chapters. He has served as the Chair of the Study Section for the Small Business Innovative Research at the National Institutes of Health (NIH), and as chair of the Bioengineering, Technology, and Surgical Sciences Study Section at NIH. Dr. Badylak is now a member of the College of Scientific Reviewers for NIH. Dr. Badylak has either chaired or been a member of the Scientific Advisory Board to several major medical device companies.

Dr. Badylak is a Fellow of the American Institute for Medical and Biological Engineering, a charter member of the Tissue Engineering Society International, and past president of the Tissue Engineering Regenerative Medicine International Society. He is also a member of the Society for Biomaterials. Dr. Badylak is the Editor-in-Chief of the Journal of Immunology and Regenerative Medicine and serves on the editorial board of several other journals. He has received many awards, including the Sigma Xi Scientific Society 2002 Research Award, the Pittsburgh Business Times Hero in Health Care Innovation & Research for 2005, the 2005 and 2008 Carnegie Science Center Award for Excellence, the 2005 Clemson Award from the Society for Biomaterials, and the Chancellor’s Distinguished Research Award in 2008.

Dr. Badylak is the third recipient of this award named for the late Marlin Mickle, from the Swanson School of Engineering, who is known as the pioneer of the field of Radio Frequency Identification (RFID). Dr. Mickle is the University’s all-time leader in most categories that measure innovation commercialization, including issued patents and licenses. Dr. Badylak is among the top handful of faculty in those categories.  Previous McGowan Institute for Regenerative Medicine affiliated faculty members winning this prize include:  Rory Cooper, PhD (2016) and Joseph Glorioso, PhD (2017).