Dr. Thottala Jayaraman is an Associate Professor in the Department of Oral and Craniofacial Sciences in the School of Dental Medicine at the University of Pittsburgh.  He received his PhD from All India Institute of Medical Sciences, New Delhi, India. After completing his post-doctoral fellowships at Yale University and Mount Sinai Medical Center, he joined Columbia University faculty as an Assistant Professor in the Department of Medicine. In addition, he also held joint appointments as an Associate Director of Vascular Biology Research Program and an Assistant Professor of Neurosurgery at St. Luke’s Roosevelt Hospital Center in New York before joining the University of Pittsburgh.

Dr. Jayaraman’s research is focused on two broad scientific areas: 1) the role of calcium binding phospholipids and phosphoproteins in vascular calcification; and 2) calcium-dependent signaling events in cellular functions and dysfunctions. He has been collaborating with Sohail Husain, MD, from Stanford University on the role of calcineurin (calcium-dependent serine threonine phosphatase) in acute pancreatitis, which was funded by the Department of Defense. This proposal involves “Optimizing a Novel Intraductal Delivery of Calcineurin Inhibitors as a Radiocontrast Infusion Formulation to Prevent Post-ERCP.” Detailed investigation on the role of calcium binding bioactive lipids and proteins would advance our understanding of their role in pathological mineralization.

Dr. Jayaraman serves as a Reviewer for several journals, namely, the Journal of Dental Research, the International Journal of Biological Macromolecules, Scientific Reports, Mini Reviews in Medicinal Chemistry, and the Journal of Neurological Sciences. 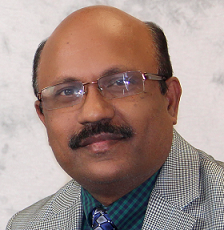