By The McGowan Institute For Regenerative Medicine | Computations and Modeling, News Archive | Comments are Closed | 22 April, 2016 | 0 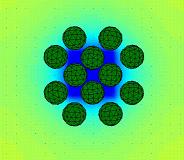 A novel investigation of how enzymatic reactions can direct the motion and organization of microcapsules may point toward a new theory of how protocells – the earliest biological cells – could have organized into colonies and thus, could have ultimately formed larger, differentiated structures.

Researchers at the University of Pittsburgh’s Swanson School of Engineering, along with collaborators at Penn State University’s Chemistry Department, found that very simple physical and chemical processes that do not rely on complex biological machinery guided the self-assembly of the microcapsules, which served as models for the protocells. Namely, the researchers isolated a dynamic cascade of events that lead the microcapsules to organize into a well-defined colony.

The researchers modeled microcapsules between 10-50 micrometers in diameter, the typical size of biological cells. In this study, the microcapsules consisted of an outer shell and a fluid-filled core containing hydrogen peroxide, which gradually leaked through the shell into the surrounding fluid. The hydrogen peroxide acted as a chemical reagent for a patch of enzymes on the surface under the microcapsules. The reaction occurring at the enzymes released heat and lowered the fluid density, driving the convection of the surrounding fluid. This fluid flow carried the immersed capsules and brought them together above the enzyme-coated surface.  After the reagent was consumed, the fluid flow ceased and the capsules remained localized above the patch of enzymes.

Dr. Balazs noted, “This study is relatively unique because Ayusman was the first to realize that simple enzymatic reactions could transduce chemical energy into fluid motion in this way and we have now used this mechanism to control the assembly of microcapsules into colonies.”

“The beautiful simplicity of the underlying principles means that this is a plausible mechanism by which the earliest biological cells, which were simply a protective shell enclosing some fluid and simple components, assembled into colonies.” Dr. Sen explained. “Neither a protocell nor a microcapsule possesses complex biological machinery, just a porous container through which molecules diffuse in and out. This could be how protocells communicated and formed the groups that would evolve into multicellular organisms.”

Dr. Balazs and her team were able to regulate the assembly of the microcapsules by patterning the distribution of enzymes on a bottom wall, creating different types of configurations – in this instance, circular, square, and crankshaft shapes. The size and number of the capsules determined the amount of fuel available to regulate the velocities. This mechanism indicates a means of controlling where and how the capsules self-organize without external stimuli.

“The density variation created by the secretion of a reagent and its reaction at the enzymes on the bottom wall caused the fluid flow, which resulted in the assembly of the microcapsules into colonies,” Dr. Shklyaev added. “No magnetic or electric fields are needed to guide the microcapsules. We only need gravity, which is present everywhere on Earth. This approach can apply both to biological applications, as well as cargo delivery into particular areas of a microchannel.”

According to Dr. Balazs, this research provides a novel approach for manipulation in small fluidic devices. Utilization of different catalysts would allow different flow patterns to develop depending on the chemicals present in the fluid or microcapsules. This could potentially lead to autonomous sorting of cells or assembly of large, predesigned structures from smaller building blocks.