By The McGowan Institute For Regenerative Medicine | Awards and Recognition, News Archive | Comments are Closed | 4 April, 2016 | 0 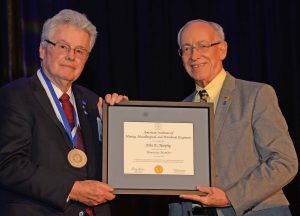 McGowan Institute for Regenerative Medicine Executive Director John Murphy is the 2016 recipient of the Erskine Ramsay Medal, presented recently by the Society for Mining, Metallurgy and Exploration (SME) and the American Institute of Mining, Metallurgical and Petroleum Engineers (AIME).  Professor Murphy was recognized “for his unselfish, tireless contributions to the coal industry, safety and health research, public outreach, professional development, mentoring, and, of course, the SME.”

AIME Honorary Membership was also presented to Professor Murphy “in recognition of his dedication and perseverance in developing a purpose and mission for the SME Foundation, continuing through his exemplary service as SME president.”  AIME Honorary Membership is one of the highest honors that the Institute can bestow on an individual. It is awarded in appreciation of outstanding service to the Institute or in recognition of distinguished scientific or engineering achievement in the fields embracing the activities of AIME and its member societies.

Professor Murphy currently serves as the Executive Director of the McGowan Institute and as a Research Professor in the Department of Chemical and Petroleum Engineering, University of Pittsburgh. His academic interests are primarily related to process and workplace health and safety.

Professor Murphy served as the Research Director of the Pittsburgh Research Center of the U.S. Bureau of Mines from 1978 until 1997. Under his direction, the Center conducted research pertaining to mine health and safety, as well as other studies that were directed toward new mining technology and mine environmental issues.

Professor Murphy is a Registered Professional Engineer. He holds an undergraduate degree from the University of Pittsburgh and a master’s degree from Duquesne University. He holds two patents and has authored more than 90 technical publications. He is the recipient of the Department of Interior Distinguished Service Award in 1985, the Presidential Rank Award for Meritorious Executive in 1986, and the Presidential Award for Distinguished Executive in 1993.

John Murphy, “John Murphy: Mine Safety Research at the US Bureau of Mines and the University of Pittsburgh,” conducted by Paul Burnett in 2015, Oral History Center, The Bancroft Library, University of California, Berkeley, 2015.