Gene Therapy for Parkinson’s Disease to Be Tested by Pitt, UPMC Experts

Gene Therapy for Parkinson’s Disease to Be Tested by Pitt, UPMC Experts 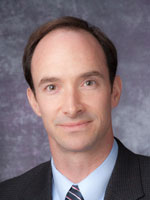 Experts at the University of Pittsburgh School of Medicine are leading the second arm of a clinical trial using gene therapy to relieve the symptoms of tremor and mobility impairment in patients with Parkinson’s disease. The technique shows promise in prolonging the effectiveness of levo-dopa, the mainstay treatment for the progressive neurodegenerative condition, by increasing production of a key enzyme essential to convert the drug into the neurotransmitter dopamine.

An estimated 7 to 10 million people worldwide have Parkinson’s disease, which is caused by degeneration of dopamine-producing neurons, said McGowan Institute for Regenerative Medicine affiliated faculty member Mark Richardson, MD, PhD, assistant professor of neurological surgery, Pitt School of Medicine, and director of Epilepsy and Movement Disorders Surgery at UPMC. Levo-dopa can replace the deficient dopamine for a while, but eventually the drug loses effectiveness, and subsequent increases in dosage may cause disabling side effects.

“Less dopamine is made as the neurons degenerate, and one reason is that there is a decrease in an enzyme needed to turn levo-dopa into dopamine,” said Dr. Richardson, who is the principal investigator of the Pitt arm of the trial. “By inserting the gene for this enzyme into cells in a specific part of the brain, we hope to make levo-dopa treatment more effective for a longer period of time.”

In the gene therapy, a harmless virus called adeno-associated virus-2 is used to carry the gene that makes the enzyme – aromatic L-amino acid decarboxylase (AADC) – into neurons. Once in the neurons, cellular machinery kicks into gear to increase production of the AADC enzyme.

To deliver the treatment, Dr. Richardson will make a small hole in each side of the patient’s skull to insert a thin catheter into the putamen, a brain region that is an important part of the circuit affected by Parkinson’s disease. After the gene therapy is infused over several hours, the catheter is withdrawn and the skull is repaired.

Different infusion doses will be tested during the course of the study. Up to 20 participants at two sites, Pittsburgh and San Francisco, will be followed for up to 3 years to have their disease and medication status reassessed.

The principal investigator of the trial, which is sponsored by Voyager Therapeutics, is Krystof Bankiewicz, MD, PhD, of the University of California, San Francisco, who also led an earlier trial that showed the gene therapy can be safely administered.

Individuals between 40 and 70 who have had Parkinson’s disease for more than 5 years and have been taking levo-dopa for at least 3 years may be eligible to participate in the trial. For more information, contact Patricia Porter, BS, at 412-648-8983 or Porterpm2@upmc.edu.