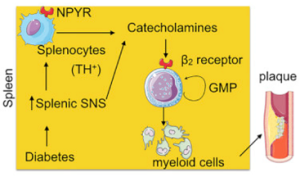 New research published in the journal Immunity from members of the University of Pittsburgh School of Medicine including McGowan Institute for Regenerative Medicine affiliated faculty members Mauricio Rojas, MD, and Kang Kim, PhD, shows that white blood cells, which typically heal infections and injuries, can become overactive and cause inflammation in plaques in blood vessels, making them vulnerable to rupture and hemorrhage in people with diabetes.

The major cause of death in people with diabetes is heart attack, and nearly one-third of the U.S. population has diabetes or prediabetes.

Studying patients and mice with diabetes, Dr. Dutta and his team found that when the fight-or-flight response is triggered, it also triggers the over-production of fighting white blood cells, or leukocytes. They also showed for the first time that stress hormones, called catecholamines, are produced in the spleen by a sub-group of white blood cells. Previous studies have shown that they were produced only by the sympathetic nervous system.

In the spleen, stress hormones trigger the proliferation of granulocyte macrophage progenitor cells, which in turn create inflammatory myeloid cells. Large amounts of inflammatory myeloid cells, which are linked to heart attack, were found in plaque in blood vessels. Further, the granulocyte macrophage progenitor cells expressed high levels of beta 2 receptors for stress hormones. Interestingly, patients who were taking beta 2 blockers were found to have fewer inflammatory cells.

“The findings suggest that diabetic patients could be treated with beta 2 blockers to reduce the number of inflammatory myeloid cells that cause plaque to rupture,” said Dr. Dutta, the senior author of the study. “If patients are on beta 2 blockers, the spleen will still be making the myeloid cells necessary to fight infection, but in smaller amounts.

Although decreasing white blood cells may be a problem for people with diabetes who are prone to infection, we need to weigh the cost of preventing infections and preventing death.